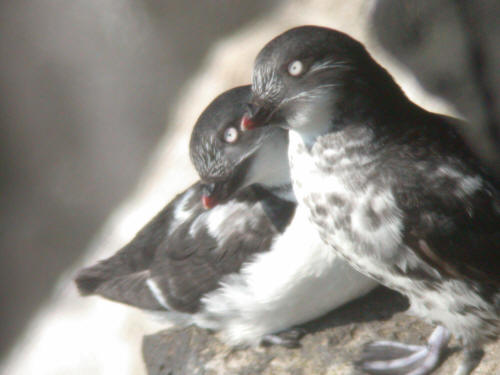 The tiniest auk; chubby, neckless. Black above, white below. In summer, a wide dark band across the upper breast. The tiny size and very stubby bill separate it from other wintering alcids of the Aleutians.

Listen to the sound of Least Auklet

Crustaceans and other marine invertebrates.
Diet in summer is small creatures that occur in swarms in cold waters, mostly very small crustaceans known as calanoid copepods, also some euphausiid shrimp, amphipods, others. Diet at other seasons not well known.
Behavior: Forages by diving from surface, using wings to “fly” underwater. Fast and agile underwater but probably not able to dive very deep.

Breeds in swarms on islands of Bering Sea south to Aleutians and Shumagins. Winters from Aleutians to northern Japan. Migration: Birds
from northernmost colonies move south to evade the solid ice that surrounds their colony sites in winter. Those from Pribilof and Aleutian islands may be permanent residents near colonies. Very rare stray as far south as Washington.