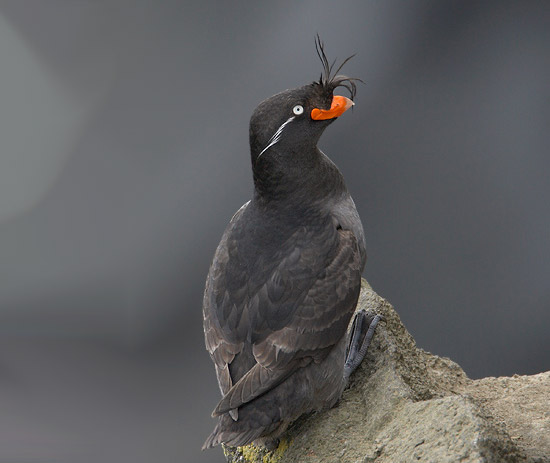 A droll auklet of the Bering Sea. Completely slate gray, darker on back; a thin white plume behind the eye. In summer, develops a fleshy gape on its stubby bright orange bill and a curious crest that curls forward
over the bill. In winter, the orange gape on the bill is lost and the crest is shorter.

Listen to the sound of Crested Auklet

Open sea; nests in colonies on sea cliffs.
Often over deep water far from land, but may forage near shore where there is turbulence caused by upwellings, rip currents, or tidal flow in passes between islands. Nests on rocky islands among boulders, talus slopes, lava flows, cliffs with many openin
gs and crevices.

First breeds at age of 3 years or older. In courtship, male puffs out chest, points bill up, and makes honking sounds; female approaches, and pair engages in bill-touching, preening each other’s neck feathers, intertwining necks.
Nest: Site is in deep crevice in cliff or among boulders, may be several feet below surface of rock pile. Nest is shallow depression in soil or pebbles at bottom of crevice.
Eggs: 1. White, becoming nest-stained. Incubation is by both sexes, 29-40 days, usually about 34.
Young: Both parents feed young (although female may do more), bringing back food in throat pouch. Young are noisy, making peeping sounds when parents present and whistling when they are absent. Age at first flight 27-
36 days; young come out of nest for a few days before to exercise wings.