Source to all birds on the Planet
admin
Alcidae, Charadriiformes, North America
Comments 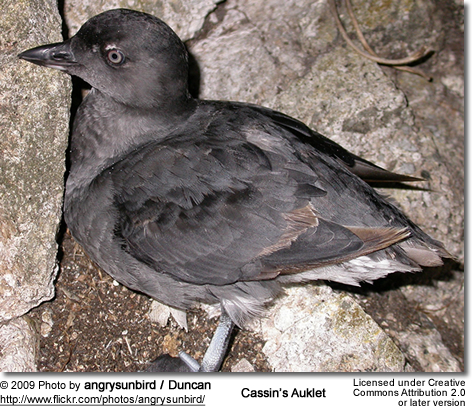 A small, stubby seabird; all dark except for the white belly; note the pale spot on lower mandible. In winter, all other small alcids in its range show much more white.

Listen to the sound of Cassins Auklet

Ocean; colonizes sea islands.
May use any kind of island for nesting (barren or forested, steep or level) as long as no predatory mammals are present. Otherwise at sea, often near nesting islands or in upwellings over continental shelf, but also far out over deep water.

Usually first breeds at age 3 years, sometimes earlier. Pairs usually form in late winter. Courtship displays include mutual bowing and head-bobbing, moving head from side to side, touching bills.
Nest: Site is in burrow excavated in soil or in natural crevice, sometimes under debris or driftwood. Both members of pair take part in excavating burrow. Little or no nest material added. Nest reused in following years by same pair.
Eggs: 1. Creamy white, sometimes becoming nest-stained. Incubation by both sexes, usually 38-39 days, sometimes as long as 57 days.
Young: Both parents visit at night to feed young by regurgitation. Young bird nibbles at white spot on parent’s bill to elicit feeding. At 41-
50 days after hatching, young make first flight and go to water, able to swim and dive immediately. Usually 1 brood per year, sometimes 2.

Mostly small crustaceans. Diet in breeding season includes euphausiid shrimp, amphipods, copepods, some small fish and squid; diet at other seasons not well known.
Behavior: Forages by diving and swimming underwater, using wings for propulsion, feet for steering. May feed by day or night. Can dive to more than 120′ below surface.