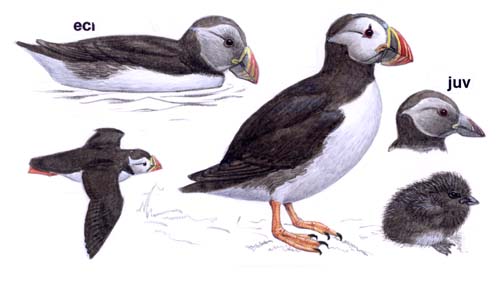 The familiar breeding adult has a striking orange, yellow, and bluish bill and matching bright orange feet. The bill is wide in profile and narrow side-to-side. A puffin’s greyish white face is decorated with fleshy yellow rosettes at the base of the bill and red rings and small bluish plates around the eyes. The upper parts, including the head, back, and wings, are black and contrast dramatically with the brilliant white underparts. The sexes look the same, although males tend to be slightly larger than females.

After the breeding season, the adult puffin sheds the colourful plates on its bill and around the eyes as well as the feathers on its head and neck. Its face becomes dark, especially around and in front of the eye. The Atlantic Puffin looks so different in the winter that people once thought it was a different species. In the spring it becomes flightless for a short period while it replaces its wing and tail feathers, which have become tattered after a year’s use. New bill and face plates and new feathers around the head complete the dressing up for the next breeding season. Immature puffins look similar to winter adults but have smaller and more pointed bills. Adults in winter plumage and immature puffins are sometimes confused with murres (called “turrs” in Newfoundland and Labrador), and some are shot illegally by hunters in Newfoundland and Labrador.

Puffins are superbly adapted to swimming underwater, and much of their general shape can be attributed to the demands of this activity. They are compact, strong birds with a relatively long body. They have short wings and powerful wing muscles. At one end the bill and head cut through the water, which passes smoothly over the streamlined body, and at the other end, legs and feet act as rudders.

Atlantic Puffins are one of the most common seabirds in the northern hemisphere. The latest estimate of the world population is about 12 million breeding birds, or about 24 million puffins in total including younger birds that haven’t yet reached breeding age.

Most puffins nest in colonies on small, rugged islands that are free of mammal predators such as mink and foxes. A few nest along mainland shores where they gain protection from predators by choosing safe locations on cliffs. Thousands and sometimes hundreds of thousands nest together at large colonies. The largest concentrations nest mostly on islands around Iceland, Norway, the Faeroe Islands, British Isles, and eastern Canada. About 365 000 pairs breed in North America from northern Maine in the United States to the Canadian Arctic. At present, about 60 percent of the North American population breeds on three islands in Witless Bay off the east coast of the island of Newfoundland.

Most puffins must spend their winters scattered across the open North Atlantic far from land. They have been sighted, mostly in ones and twos, along the edge of the arctic pack ice in the north, and as far south as New York in the west and the Canary Islands off northern Africa in the east.

Listen to the sound of Atlantic Puffin

Puffins are true seabirds, spending most of their time swimming, diving, and feeding. For about four to five months every year they come to land to breed, but even then they spend a lot of time at sea. Puffins normally keep the same mate and the same burrow from year to year. The average bird lives about 20 years.

Puffins return to colonies around mid-April. Early in the season many birds are “house-hunting,” and owners have to defend their sites. Puffing up their feathers, opening their bills, and making other threat displays is usually enough to scare off newcomers. If not, fights break out, and it is not uncommon to see two puffins tumbling down a slope with their bills locked together in combat.

Observers at puffin colonies are often impressed by large groups flying in wide circles over the sea in front of their nesting grounds. These puffin “wheels” are common behaviour at most colonies, but are more frequent at colonies where there is much gull predation. They probably serve as an anti-predator tactic by confusing or swamping the predator and reducing the chance that an individual puffin will be killed. Puffins returning to or leaving the colony can join the wheel and then drop out near their burrow or on the sea. Wheels also may be important to immature puffins, allowing them to learn about the colony without a high risk of being killed.

Puffins eat small marine animals, mainly fish such as capelin and sandlance. Other fishes, as well as crustaceans, squid, and marine worms, are taken when those are less available. When feeding, a puffin swims at the surface of the sea much as a duck would, then dives head-first underwater. The bird probably swims down through the water until it reaches a depth at which its prey can be caught, pursues suitable fish or other food items, and grabs one after another with its beautifully fashioned but deadly bill before returning to the surface.

Adults hold fish crossways in their bills while carrying food back to their chicks. Chicks are normally fed about 10 g of food four to ten times per day, mostly in the morning. Adults usually carry only one or two 12 to 15 cm capelin or sandlance at a time, but more if the fish are smaller. The record number of fish held at one time by a puffin in Canada is 61. These were larval sandlance 2.3 to 3.3 cm long that together weighed only 2.3 g, about the same as a half teaspoon of water, and that unfortunately were low in energy value.

How can a puffin catch and hold 61 fish in its bill? In the puffin’s mouth a series of backward-pointing spines project from the tongue and top of mouth and hold the food in place while more is being caught.

It takes four to five years before a puffin is mature enough to breed. Most puffins choose to nest on grassy slopes in burrows 50 to 200 cm long, which they dig with their bills and the sharp claws on their feet. Some birds nest in cracks under boulders or in crevices on cliff faces, especially in arctic colonies where there is little soil or where the soil remains frozen for much of the summer. After cleaning out their burrows, many puffins line their nest chamber with grass, twigs, and feathers. The slightly enlarged nest chamber where the egg is laid is usually placed at the end of the burrow.

Courtship occurs mostly on the water, where males flick their heads back, puff up their chests, and flutter their wings to attract females. Billing is one of the most obvious and endearing behaviours to be seen on a puffin colony. A billing pair face each other and repeatedly tap their bills together by rapidly swinging their heads side to side. This is usually a pair-bonding behaviour between mates, but birds will sometimes bill with neighbours as well.

After a period of courtship and mating, the female puffin lays a single egg that is about 14 percent of her weight. The egg is whitish at first with faint blotches, but quickly becomes stained brown with dirt and mud. Both mates take turns incubating the egg, which takes about six weeks to hatch.

A newly hatched chick is covered with soft down, grey-black on the back and head and white on the belly, and weighs about 40 g. It has to be brooded, or kept warm, by a parent for the first week until it can maintain its own body temperature. Then it is left alone most of the time in the safety of the burrow while both parents come and go, bringing it food.

The chick grows rapidly if food is abundant. In four or five weeks it reaches a peak weight of 250 to 350 g and has replaced its downy coat with body and flight feathers. Chicks normally fledge, or complete the process of growing flight feathers and leave the nest, when they are about 40 days old, but the process can take as long as 80 days if food is very short. Most chicks fledge under the cover of night and are at sea, far from the colony, by morning. Many chicks die if food is very scarce. Breeding success varies greatly between years and even between colonies, but is usually about 60 to 90 percent.

This species has a large range, with an estimated global Extent of Occurrence of 100,000-1,000,000 kmÂ². It has a large global population estimated to be 5,700,000-6,000,000 individuals. Global population trends have not been quantified; there is evidence of a population decline (del Hoyo et al. 1996), but the species is not believed to approach the thresholds for the population decline criterion of the IUCN Red List (i.e. declining more than 30% in ten years or three generations). For these reasons, the species is evaluated as Least Concern. (source Birdlife.org)

Strongly dispersive. Essentially marine outside breeding season, keeping well offshore. Mid-ocean occurrences not rare, due to transatlantic movements by some immature birds. Southern colonies occupied late March to mid-August, northern ones May to early September. On fledging, juveniles make their own way to sea and stay there until they begin to visit colonies again as pre-breeders. Pre-breeders of 4-5 years of age attend colonies again from April onwards, with progressively younger birds arriving as summer advances; most birds do not visit colony until 2 years old. Winter distributions and summer ranges of immatures are poorly known, since relatively few ringing recoveries, especially from offshore zones. Occurs south to New Jersey in western Atlantic and to Morocco in eastern, southern breeding populations dispersing furthest south in winter.
Distribution map breeding season