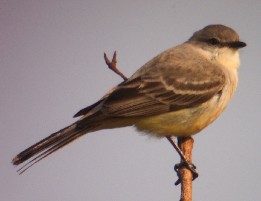 The Chapada Flycatcher is superficially similar to Campo Suiriri Suiriri suiriri affinis but is readily identified by its vocalisations, especially the distinctive male-female duets, bill size and shape and colour of the tail. The species previously had been confused with Suiriri suiriri affinis, with which it is syntopic at multiple sites. The new species was first identified by voice. Although cryptically similar to S. s. affinis in many respects, the new species is readily identified by all vocalizations, bill size, color pattern of the tail, and shape of the central rectrices. Most distinctive are the male-female duets, which are accompanied by dramatic wing-lifting displays not performed by any congeners. The new species and S. s. affinis do not respond to one another’s vocalizations. Locally distributed in cerrado and campos habitats throughout much of central Brazil, south of the Amazon and east of the Rio Madeira, and at least sparingly to depto. Santa Cruz, eastern Bolivia. Most confirmed records are from Mato Grosso, Brazil, with scattered specimens east and north to the Brazilian states of Para, Goias, Tocantins, and Maranhao. The westernmost records are from Campo do Estanho, Amazon- as, Brazil, and Parque Nacional Noel Kempff Mercado, depto. Santa Cruz, Bolivia. Undoubtedly occurs more extensively within the area bounded by those records, but probably overlooked due to morphological similarity to S. s. affinis. Zimmer, K.J.; Whittaker, A. & Oren, D.C. (2001): A cryptic new species of flycatcher (Tyrannidae: Suiriri) from the cerrado region of central South America Auk 118: 56-78
download discovery article
← Previous Post
Next Post →