Source to all birds on the Planet
admin
Caprimulgiformes, South America, Steatornithidae
2 Comments 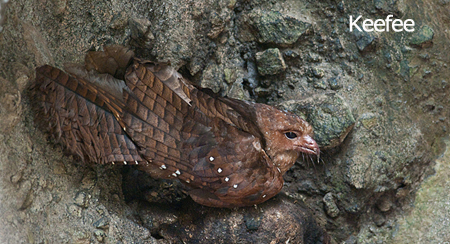 Listen to the sound of Oilbird

Oilbird lives in cave ledges during the day. It roosts and breeds in selected caves used since numerous decades of years. They can be found from sea level to 3400 metres of elevation. They need evergreen lowlands and montane forests to feed year round.

Nest is made with regurgitated plant fibres, compacted into a firm paste. It is a cylindrical mound of about 16 inches in diameter. They nest in large colonies, often at good distance into the cave.
Female lays 2 to 4 white eggs, at intervals of 2 to 5 days. Incubation lasts about 32 to 35 days, by both parents, and begins with the first egg laid. Altricial chicks are pinkish, naked and with closed eyes at hatching, and they have an egg tooth.
Chicks are fed by both adults, with oil-fruits, but they grow slowly and they leave the nest at about 110 to 120 days of age.
At 70 days, they are similar to adults, with shorter wings and tail, but their weight reaches about 600 grams, about 50% more than adults. At this time, parents feed them at lower rate, and youngs lose weight, and when they fledge, they have adult weight. They are apparently monogamous and form permanent bonds. Oilbirds are also highly gregarious inside caves. Their bulky nests are built on ledges above cave floor. The clutch size is two to four. Parental care is shared between both adults.

Some dispersal after breeding, young might be nomadic in their first year.