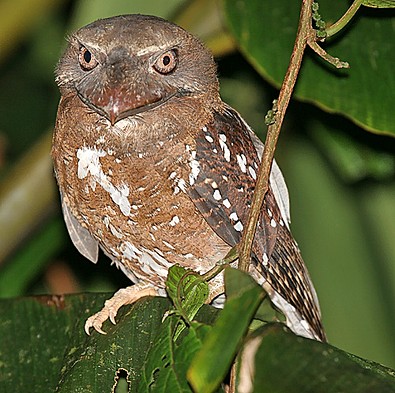 It has distinct barring on the primary wing feathers and tail feathers, where other frogmouths are more uniform. Its speckles are larger, and the white spots on its breast and underbelly are more pronounced than on other frogmouths.

Subtropical rainforest from which they may forage into neighboring woodlands.

At first the bird was thought to be a subspecies of the Australian Marbled Frogmouth (Podargus ocellatus). In 1998 an expedition by the Florida Museum of Natural History to Santa Isabel Island managed to collect a new specimen. Upon examining it, Nigel Cleere, Andrew Kratter, David Steadman and co-workers realized that it was highly distinct, and it was moved to a newly coined genus, Rigidipenna