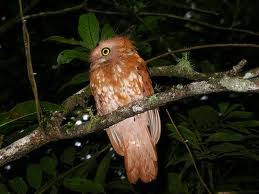 Male dull rufous-brown above with buffish-white collar, bold whits spots on scapular. Breast with white narkings, flanks and belly whitish with brown feather edges. Appears less darkish brown than congenetic Short-tailed Frogmouth. It is only distinguished for the latter by vocalizations.

Listen to the sound of Short-tailed Frogmouth

Oriental Region : Sumatra. Batrachostomus poliolophus is endemic to Sumatra, Indonesia, where it is known from a small number of records from the Barisan range

It occurs in sub-montane primary forest and mixed pine forest between 660 and 1,400 m.

Few data, builds a small cup from its own down, placed on a branch. Clutch size 1-2 eggs, the male incubates during daytime.

This forest-dependent species is listed as Near Threatened because it is assumed to have experienced moderately rapid declines owing to the extensive loss of lowland forests in Sumatra. It is not considered more threatened because it occurs in lower montane forest where habitat loss has been less rapid.

Deforestation in the lower part of its altitudinal range is a threat, even within the protected areas in its range, such as Kerinci-Seblat National Park. Forest destruction in the Sumatran lowlands has been extensive, but its ability to persist at higher elevations suggests this species is not suffering more than a moderately rapid decline