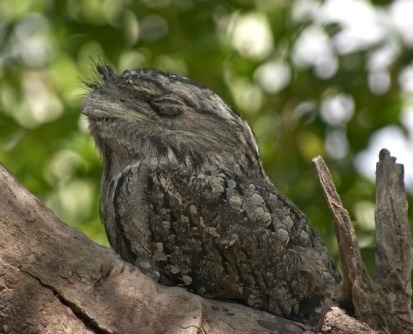 The Papuan Frogmouth has a bulbous bill, red eye, cream eyebrow, long tail and dark wings. The male of the species is slightly larger, darker and marbled in appearance. The female is more rufous in appearance.

Listen to the sound of Papuan Frogmouth

The Papuan Frogmouth is commonly found in northeast Australia from Townsville to Cooktown. They roost singly or in small groups in either dense or sparse trees at various heights. Also, they will perch with the head skyward, well camouflaged and using stillness to resemble a branch or stump of the tree.

The Papuan will normally breed between October and January. They create a small flat structure of twigs usually in an upright fork of a tree. The birds prefer the tree to be at least 10m from the ground to avoid predators. The female will then lay one or two white eggs and incubate until birth.

Feeding at night usually on insects, frogs, small rodents and lizards. Flight is from a perch, is silent and slow as they swoop on the prey and pick them up with the wide bill. Hunting is usually done from the edge of dense forest such as monsoon forest or rainforest, often from fence posts or signposts on the road. They are slow to move from the road, so are vulnerable to road traffic. Hunting is normally done early evening or before dawn while there is faint light.