Source to all birds on the Planet
admin
Australasia, Caprimulgiformes, Podargidae
1 Comment 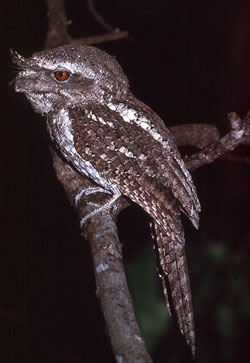 The Marbled Frogmouth is the smallest frogmouth, much smaller and slimmer than the Tawny Frogmouth (Podargus strigoides) in NSW, with a length of 30-45 cm and a wingspan of 62-75 cm. The plumage varies from grey to rich brown or rufous-brown, delicately streaked and mottled with black and spotted or mottled with white, more heavily on the underbody. There are also obvious pale supercilia and stripes along the sides of the back, a dark stripe from the base of the bill, and a prominent tuft of cream and chestnut banded plumes protruding above the bill. The tail is long and graduated. The eyes are usually orange but range from yellow to orange-red. Great care is needed to distinguish this species from the far more common and widespread Tawny Frogmouth: the call is the best distinguishing feature, but it can also be identified by its longer and more strongly graduated tail, more finely patterned plumage and the barring of the tuft of feathers over the billl. The species has a loud bubbling, gobbling territorial call ending with a bill clap and a softer but diagnostic repeated whoor-loop contact call. Birds are usually seen singly, and during the day adopt a cryptic pose, like that of other frogmouths, when disturbed so as to appear like a tree-branch. By day, roosting birds tend to perch on a horizontal branch against the trunk of a tree

Australasia : New Guinea, East, Northeast Australia. In Australia, there are two widely separated subspecies of Marbled Frogmouth, one confined to central-eastern Cape York Peninsula, and other currently restricted to south-eastern Queensland and north-eastern NSW, between about Gladstone and Lismore, and inland to Burnett Range in Queensland and west of the Richmond Range. There are earlier records south to about Grafton, but no confirmed records south of Lismore since 1980, with most reports misidentifications of the much more common Tawny Frogmouth. Outside Australia, the species is widespread throughout New Guinea and on its associated islands, as well as on Bougainville and the Solomon Islands.

Prefers subtropical rainforest, particularly in deep, wet, sheltered gullies along creeklines and often containing stands of Bangalow Palms or ferns. Less often, they are found in the ecotone between rainforest and wet Eucalyptus forests, or occasionally in cool rainforest and higher elevation temperate rainforests.

Breeds in October and bulids a flimsy platform of twigs and pieces of vines for a nest. RHe clutch size is 1 sometimes 2 eggs. Both parents incubate the eggs.

The Marbled Frogmouth is, like other frogmouths, nocturnal, hunting at night and roosting by day. The diet consists mainly of large nocturnal insects. They hunt from large perches, such as stumps or low branches, and sallying out to take their prey from the ground or from the foliage of plants.

Threats are
Clearing, fragmentation and isolation of rainforest and associated wet eucalypt forests for agriculture and forestry has been the main cause of past declines and continue to operate as a threat for the species.
Opening of the canopy and promotion of dense understorey growth caused by timber harvesting.
Invasion of habitat by weeds following disturbance.
Isolation of patches of habitat owing to frequent burning of connecting forest.