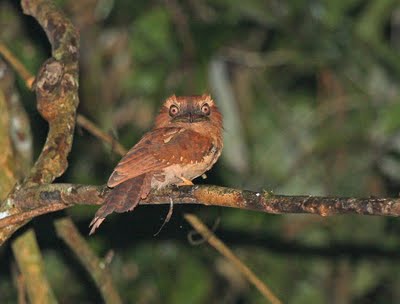 Listen to the sound of Goulds Frogmouth

Oriental Region : Malay Peninsula, Sumatra, Borneo. Batrachostomus stellatus occurs from central peninsular Thailand, Sabah, Sarawak and Peninsular Malaysia, Singapore, Kalimantan (including the North Natuna Islands) and Sumatra (including the Riau and Lingga archipelagos and Bangka Island), Indonesia and Brunei, where it is fairly widespread and common in suitable habitat

Few data, builds a small cup from its own down, placed on a branch. Clutch size 1 egg.

It feeds on insects in the lower storeys of forest

This forest-associated species is listed as Near Threatened because it is assumed to have experienced moderately rapid declines owing to the extensive loss of lowland forests from large areas of the Sundaic lowlands. It is not considered more threatened because it can use secondary habitats.

Rates of forest loss in the Sundaic lowlands have been extremely rapid (Kalimantan lost nearly 25% of its evergreen forest during 1985-1997, and Sumatra lost almost 30% of its 1985 cover), because of a variety of factors, including the escalation of logging and land conversion, with deliberate targeting of all remaining stands of valuable timber including those inside protected areas, plus forest fires (particularly in 1997-1998).