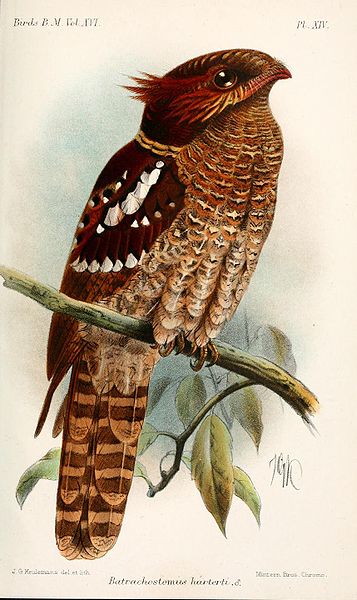 It is a large, dark, chestnut-brown frogmouth, ranging in length from 32 to 37 cm. The wing length is 220-250 mm. It has buffish barring on the crown and a narrow buffish collar on the hindneck. The wing-coverts have large white spots. The underparts are paler brown with buff bars and spots. The sexes are similar.

Oriental Region : Borneo. Batrachostomus harterti is restricted to the Bornean Mountains Endemic Bird Area. Discounting its erroneous listing for Tanjung Puting National Park, it is known by only eight specimens from four areas in Sarawak, Malaysia, and one in West Kalimantan, Indonesia. The range and population have not been thoroughly investigated.

Its preferred habitat is lower montane forest of both primary and secondary growth, at an altitude of 300 ? 1500 m above sea level.

This forest-dependent species is listed as Near Threatened because it is assumed to have experienced moderately rapid declines owing to the extensive loss of lowland forests from large areas of Borneo. It is not considered more threatened because it occurs in lower montane forest.

Although very poorly known, this species has probably declined at a moderately rapid rate, in line with forest clearance on Borneo. As it occurs at higher elevations it may have escaped more rapid declines