Source to all birds on the Planet
admin
Caprimulgidae, Caprimulgiformes, Eurasia
Comments 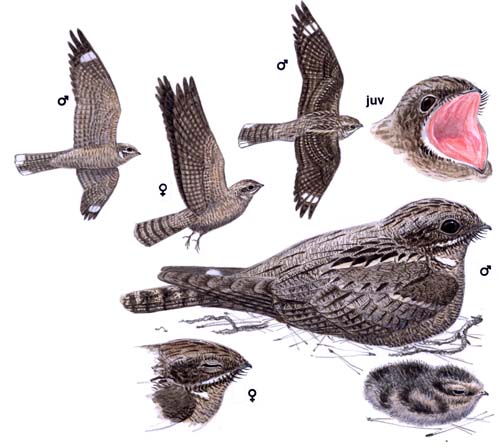 Listen to the sound of Nightjar

Essentially heathland birds, they require low, sparse vegetation in which to nest. For feeding, they will travel a fair distance to preferred heathlands, deciduous or mixed woodlands, orchards, riparian and freshwater habitats, and gardens.

Nightjars return from Africa in late April and May. Upon return, males attract a mate and establish a territory by calling. During courtship males fly around a female, often wing clapping or gliding with the tail spread out and wings held up. Nests are selected by males and are usually a shallow scrape on bare ground amongst heather or bracken. Eggs are laid between mid-May and mid- July. A typical clutch consists of 1-3 eggs, mainly 2, and if the first brood is produced early in the season, a second brood may be possible. Incubation lasts for 17-18 days and the fledge after 16-17 days.

Nightjars hunt for insects on the wing at dusk and dawn, their agility allows them to perform rapid twists and turns in pursuit of their prey. Most of the diet consists of moths, flies, craneflies, beetles, and ants. Nightjars have an unusual serrated middle claw which they use to preen their feathers .

This species has an extremely large range, and hence does not approach the thresholds for Vulnerable under the range size criterion (Extent of Occurrence <20,000 km2 combined with a declining or fluctuating range size, habitat extent/quality, or population size and a small number of locations or severe fragmentation). Despite the fact that the population trend appears to be decreasing, the decline is not believed to be sufficiently rapid to approach the thresholds for Vulnerable under the population trend criterion (>30% decline over ten years or three generations). The population size is extremely large, and hence does not approach the thresholds for Vulnerable under the population size criterion (<10,000 mature individuals with a continuing decline estimated to be >10% in ten years or three generations, or with a specified population structure). For these reasons the species is evaluated as Least Concern.
Caprimulgus europaeus is a widespread summer visitor to much of Europe, which
constitutes >50% of its global breeding range. Its European breeding population is
large (>470,000 pairs), but underwent a moderate decline between 1970-1990.
Although many of these declines abated during 1990-2000, several populations-
notably the sizeable one in Turkey-suffered declines, and the species declined slightly
overall. Its population has clearly not yet recovered to the level that preceded the
initial decline.
This nightjar is breeding from Morocco, the Iberian Peninsula, the British Isles and southern Scandinavia to Mongolia and Pakistan. It is wintering in Sub-Saharan Africa. The population of the European Union is estimated at 100000-175000 breeding pairs, 80% of which inhabit Spain (Tucker & Heath). Despite these still large numbers, this species is undergoing since the end of last century a strong decline, especially in north-western Europe. The main reasons for this are habitat loss and use of pesticides