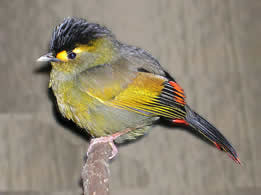 Overall, an olive-grey bird with a black cap, black uppertail. It has a striking gold streak either side of a black eye, gold in the wing as a broad panel and extending as gold fringes to the primaries. Otherwise dark remiges and retrices are tipped with vibrant red. The closed underside of the tail appears as a solid sheet of orange-red flame. Similar spp. none within the range. Voice distinctive fluty notes with a terminal inflection. Liocichla bugunorum was recently described from Eaglenest Wildlife Sanctuary, Arunchal Pradesh, India. This is the only known locality for this species at present, which may prove to range further east in central and eastern Arunchal Pradesh and also into neighbouring Bhutan. However, given its striking plumage and distinctive vocalisations it is unlikely that the species could have escaped detection for so long if it were relatively common and widespread. The species was not recorded during bird surveys involving many visits between 1997 and 2001 at Eaglenest. Little is known about its ecology. Other Liocichla spp. occur in evergreen primary and some secondary habitats, typically singly or in pairs. They tend to be unobtrusive. The area where this species has been recorded is part of a wider area of contiguous closed canopy forest. The species has been recorded from logged forest which may well be sub-optimal habitat. Logging for fuel wood continues at the one known locality for the species, as local Bugun people rely heavily on local timber for fuel. A proposed road development at the same site poses a serious threat as it would bisect the area where all existing records come from.
download discovery article
← Previous Post
Next Post →