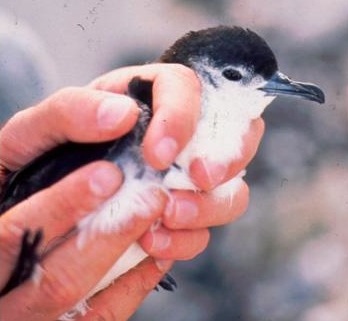 For the first time in almost four decades, a new bird species has been discovered in the United States. But thereâ€™s a catch: the Bryanâ€™s shearwater was identified in a museum collection. Though others have been reported, the first living bird-in-hand example awaits finding. On February 7, 2012, the DNA tests on 6 specimens found in Ogasawara alive and dead between 1997 and 2011 determined that they were Bryan’s Shearwater. It is assumed that Bryan’s Shearwater still survives in the uninhabited islands.

[abstract article]. Small black-and-white shearwaters of the genus Puffinus are distributed globally, and their phylogenetic relationships are complex and uncertain. In 1963 a small shearwater collected at Midway Atoll in the North Pacific Ocean was identified as a Little Shearwater (P. assimilis), but several physical features suggest closer alliance with Audubonâ€™s Shearwater (P. lherminieri) and its relatives. Biometrics indicate that the taxon this specimen represents is smaller than any other known Shearwater, and phylogenetic analyses indicate it is distinct, with a pair-wise sequence divergence of at least 3.8% from related taxa. We thus propose a new species based on the specimen: Bryanâ€™s Shearwater (Puffinus bryani nom. nov.). The breeding and nonbreeding ranges of Bryanâ€™s Shearwater are unknown, but a physical resemblance to the North Atlantic boydi (of controversial taxonomic status within Puffinus) suggests an affiliation with subtropical or tropical waters. Bryanâ€™s Shearwater is apparently rare and could be threatened by extinction; therefore, additional information is needed to increase our understanding of this taxon and its conservation requirements.