In Greek folklore fables the cormorant was once a wool-merchant. He entered into a partnership with the bramble and the bat, and they freighted a large ship with wool. She was wrecked and the firm became bankrupt. Since that disaster the bat skulks about until midnight to avoid his creditors, the cormorant is forever diving into the deep to discover its foundered vessel, while the bramble seizes hold of every passing sheep to make up the firm’s loss by stealing the wool.

Near the shores of the Zambesi river, in the shallow lake through which the Shire flows after leaving the Nyassa, the natives drive piles in the bottom, at a distance from shore, and rising a foot above the surface. An elastic piece of wood, with a noose attached, is placed on the main pile, and serves to trap the Cormorants and Darters, which come to rest on them.

On Sunday, September 9th, 1860, a cormorant took up its position on the steeple of Boston church, in Lincolnshire, much to the alarm of the superstitious. There it remained, with the exception of two hours’ absence, till early on Monday morning, when it was shot by the caretaker of the church. The fears of the credulous were singularly confirmed when the news arrived of the loss of the Lady Elgin at sea, with three hundred passengers, amongst whom were Mr. Ingram, member for Boston, with his son, on the very morning when the bird was first seen.

In the Shetland Islands they know that the Cormorant is very easily domesticated, and when treated with kindness will become exceedingly docile, exhibiting a very high degree of intelligence, and an amount of affection scarcely to be expected from a bird which in its wild state is remarkable for its extreme shyness of man.

In Norwegian myths and folklore, three cormorants flying together are said to be carrying messages and warnings from the dead. In northern Norway, cormorants are considered to be good luck when they gather in a village. Norwegian myth also states that people who die at sea can visit their former homes in the form of a cormorant. 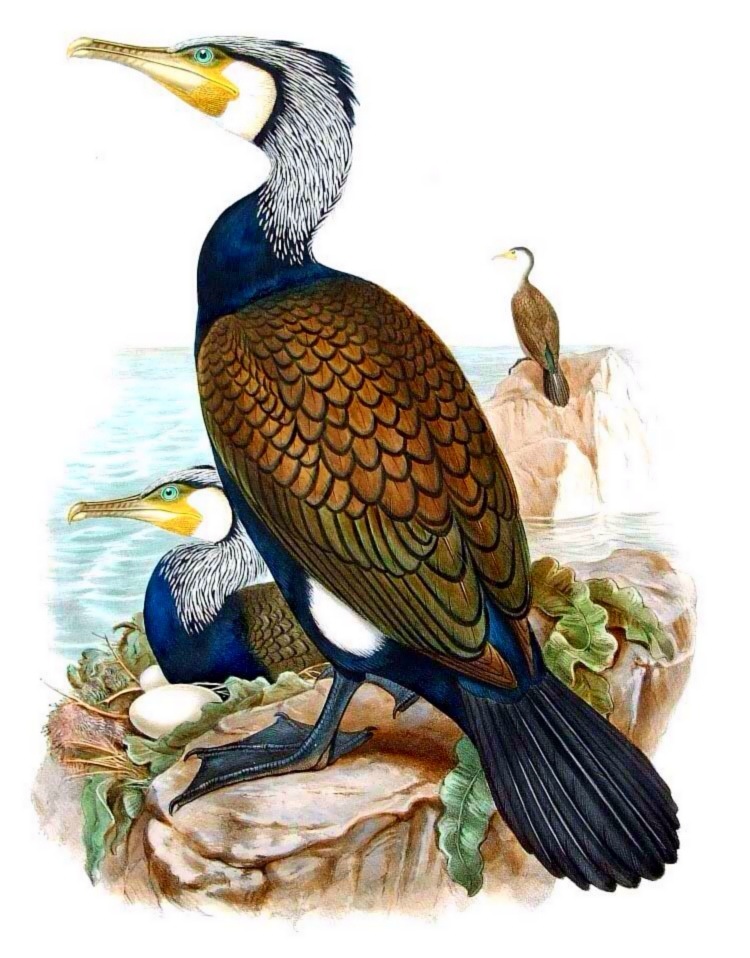 A history of the birds of Europe : including all the species inhabiting the western palaearctic region.’ London : Published by the Author, 1871.