If a Great Horned Owl (Bubo virginianus), or buuj, flies into a personâ€™s house, it is sign that someone in that house will fall ill.

While the Great Horned Owl (Bubo virginianus) is generally thought to be a bird that will bring you bad luck, it is a good sign for hunters. Among the Mopan, the presence of this owl during a hunt is said to signal the presence of game, but that the hunter must move quickly in order to shoot it. The Qâ€™eqchiâ€™ of Belize also say that for hunters the cry of the kwarom, or Great Horned Owl, is a sign to hunters that a gibnut is nearby.

Some men started off hunting. They traveled along and camped at a certain place. They had an orphan boy to look after their camp. Just before light they started out hunting, and while the orphan still sat in camp a Great Owl sitting on the top of a tree said, “A bear is hidden in the asawe tree standing there. Tell the man who is good to you; let him kill it and eat.”
After the Owl had gone away the orphan sat about until the hunters came back one by one, but that one that liked him had not come. He came back last, and the orphan said to him, “An Owl came and said to me, a bear is hidden close by. Let him kill it for you and then you eat it.'” So they two started out. When they reached the place the bear was there as had been foretold, and the man killed it and skinned it, and they brought it back. When they got to camp they had a quantity of meat.
That night the Owl came again and sat on a tree. When it made a noise, one of the hunters said, “What does he say?” That orphan boy said to him, He says to you ‘Someone else is going with your wife.’ That is what he told him. 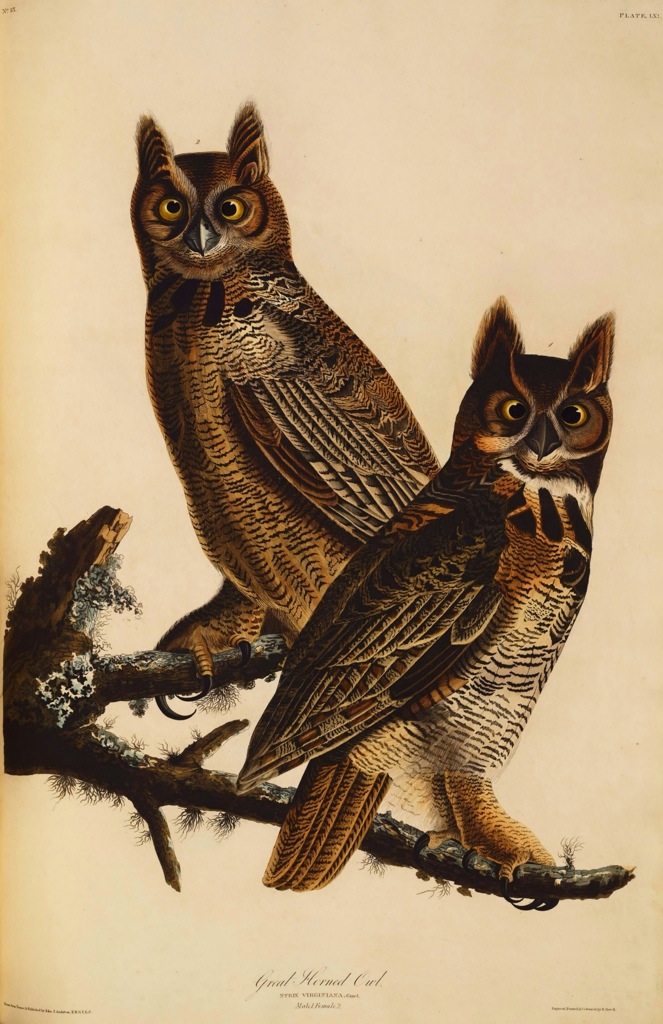 A man went hunting and camped at the edge of a thicket. When night came the man sitting there heard an Owl hoot. A big oak stood near, and the Owl came there and hooted. He came there because his wife lived near this tree. He scolded his wife and whipped her and his wife cried out. The man heard it, and after he had sat there for some time he lay down, and while he was lying there the old Owl came and perched on the other side of the fire and scolded him. The Owl said to him, “Why did you come and stop here?” The man answered, “I am doing nothing. I am only hunting.” Then the Owl said, “You lie. You are here because you want my wife.” “I have nothing to do with your wife,” said the man.
After they had disputed for some time, they fought, and the man overpowered the Owl and beat him. Afterwards the Owl overpowered the man, beat him, and scratched his face. Then the Owl went away. The man lay where he was and in the morning his face was swollen so much that he could not see. He could indeed see a very little, but he did not go hunting. He went home.
His friend who lived thereabouts came to see him, and said, “I can whip that Owl. When you are better take me along and show me the place. I will fight that Owl.” And when the man got well his friend said, “Go and show me the place.” They started off, and the man guided him to the place where he had camped. They remained there and, when night came, as before the Owl hooted and again was heard to beat his wife so as to make her cry out. Then the Owl came to the place where the men sat and perched on the other side of the fire. He again scolded the men. The man who had wanted to fight fought the Owl, overpowered him and beat him. Afterwards the Owl in his turn overpowered the man, beat him, and scratched his face so that he could not see. When the Owl let him go the other man said, “That is what I told you he would do, but you would not believe me.” This is how it is told.

Hull, K. & Fergus, R. AN ETHNOORNITHOLOGICAL APPROACH TO HUMAN-BIRD RELATIONS AMONG THE MOPAN MAYA OF BELIZE. 2009.