The Basques tell that once upon a time a bit of straw was blown into the Blessed Virgins eye. The redbreast (in Basque Chindorra), who was sitting on a bush close at hand, beheld her tears. What did he do? He flew off at once to tell the swallow, and then, carrying in his bill some clear water from a neighbouring stream, he returned with his friend, and perched on the Virgin’s face. Then, whilst the redbreast tenderly let the liquid fall into the eye, the swallow gently passed his long tail feathers under the lid, and so removed the straw.

In Normandy folks think the swallow knows how to find upon the sea-beach a pebble which has the marvellous power of restoring sight to the blind. The peasants tell of a certain way of obtaining possession of this stone. You must put out the eyes of a swallow’s young, whereupon the mother-bird will immediately go in quest of the stone. When she has found it and applied it, she will endeavour to make away with the talisman, that none may discover it. But if one has taken the precaution to spread a piece of scarlet cloth below the nest, the swallow, mistaking it for fife, will drop the stone upon it.

In Normandy the peasants think that the heart of the swallow, worn round the neck, was supposed to render the wearer attractive.

German peasantry think if you can get some swallow’s eggs, unseen by the parents, boil them hard and replace them in the nest, you may then obtain possession, of a certain herb which the old birds fetch to make them soft again, and which, if carried in the pocket, ensures always the possession of money.

In the area of Comte, France it is believed that if a swallow flies under a cow’s belly the milk will become blood, and the cow is said to be swallow-struck. The orily way to cure this, disease is to tie the animal up in its stall, milk it, and sprinkle the milk at a spot whore cross-roads meet.

In England the presence of the swallow is sometimes considered as ominous of death: in Yorkshire, for instance, where its descent down a chimney is a sure sign of the speedy decease of one of the inmates of the house.

A person in a house will die, which is believed in Norfolk to follow from an unusually large gathering of these birds round a dwelling, with the addition that with them the departing spirit will take flight. When swallows gather, they say at Sherringham, in Norfolk, before they leave, and sit in long rows on the church leads, they are settling who is to die before they come again.

The Russian peasant believes that on the 25th of March the swallow comes flying from Paradise to bring warmth to the earth. 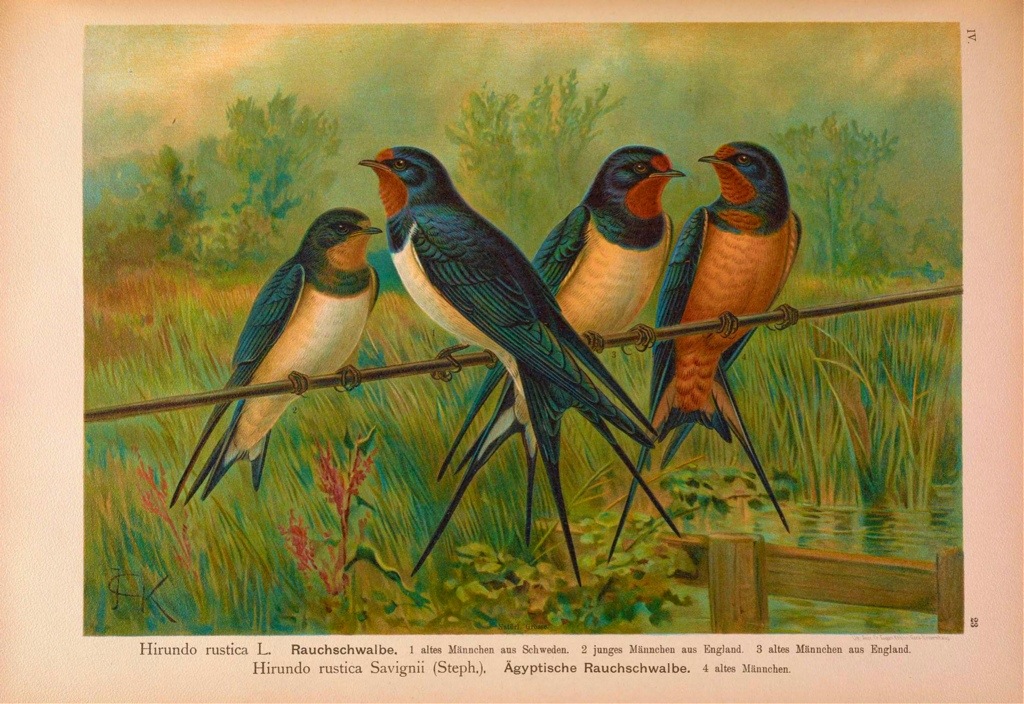