Source to all birds on the Planet
admin
Ardeidae, folklore
Comments

The Bohemians declare that the heron warns men of their danger when lost in the marshes, and endeavours by her cry to lead them to a safe place.

It is said in Ireland that small eels pass through the intestines of a, heron uninjured, so that it swallows the same individual several times in succession.

The fat of a heron, killed at the full of the moon, is believed in the north of Ireland to be an excellent remedy for rheumatism.

In Germany the peasants believe Herons flying up and down in the evening, as if doubtful where to rest, presage some evil approaching weather. 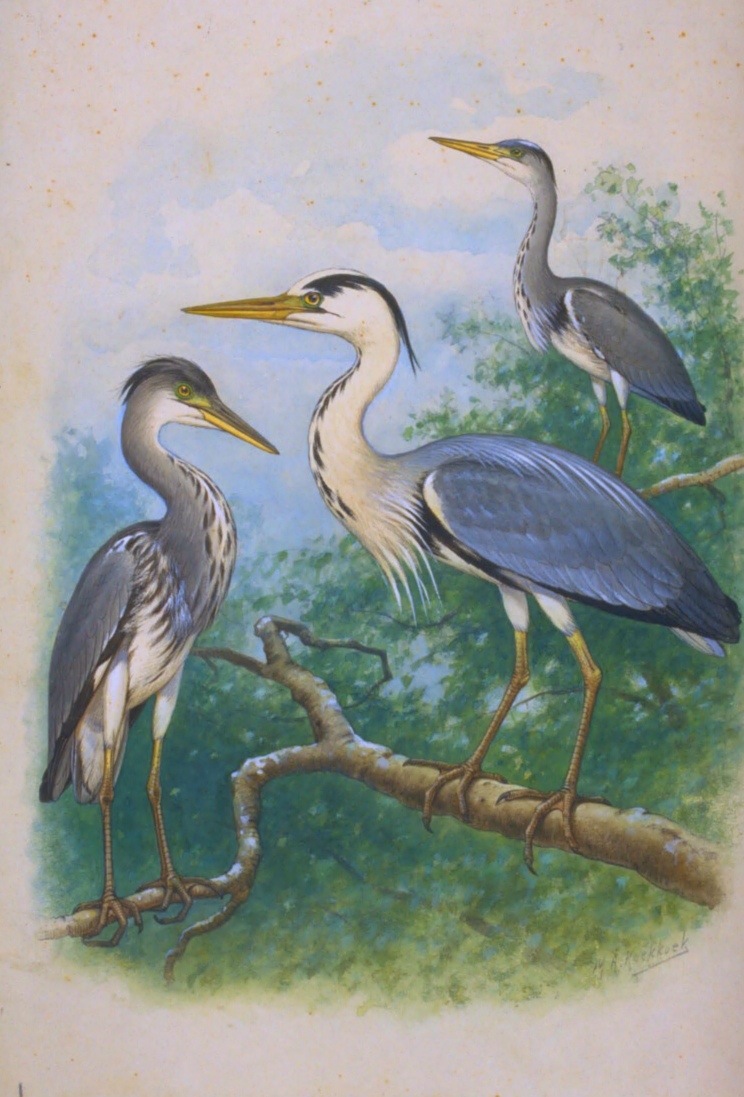 It is said in some parts of the county that when Herons are seen flying up the course of the Tweed in numbers it betokens stormy weather. This may be on account of the bird’s habit of leaving discoloured waters and proceeding to smaller and clearer streams during floods.

Among the ancient customs, was one of swearing an oath upon the dead body of a Heron, and whereby many a gallant knight has, in years long passed, plighted his troth to his lady fair, as the most solemn and honourable manner of assuring her of his sincerity. 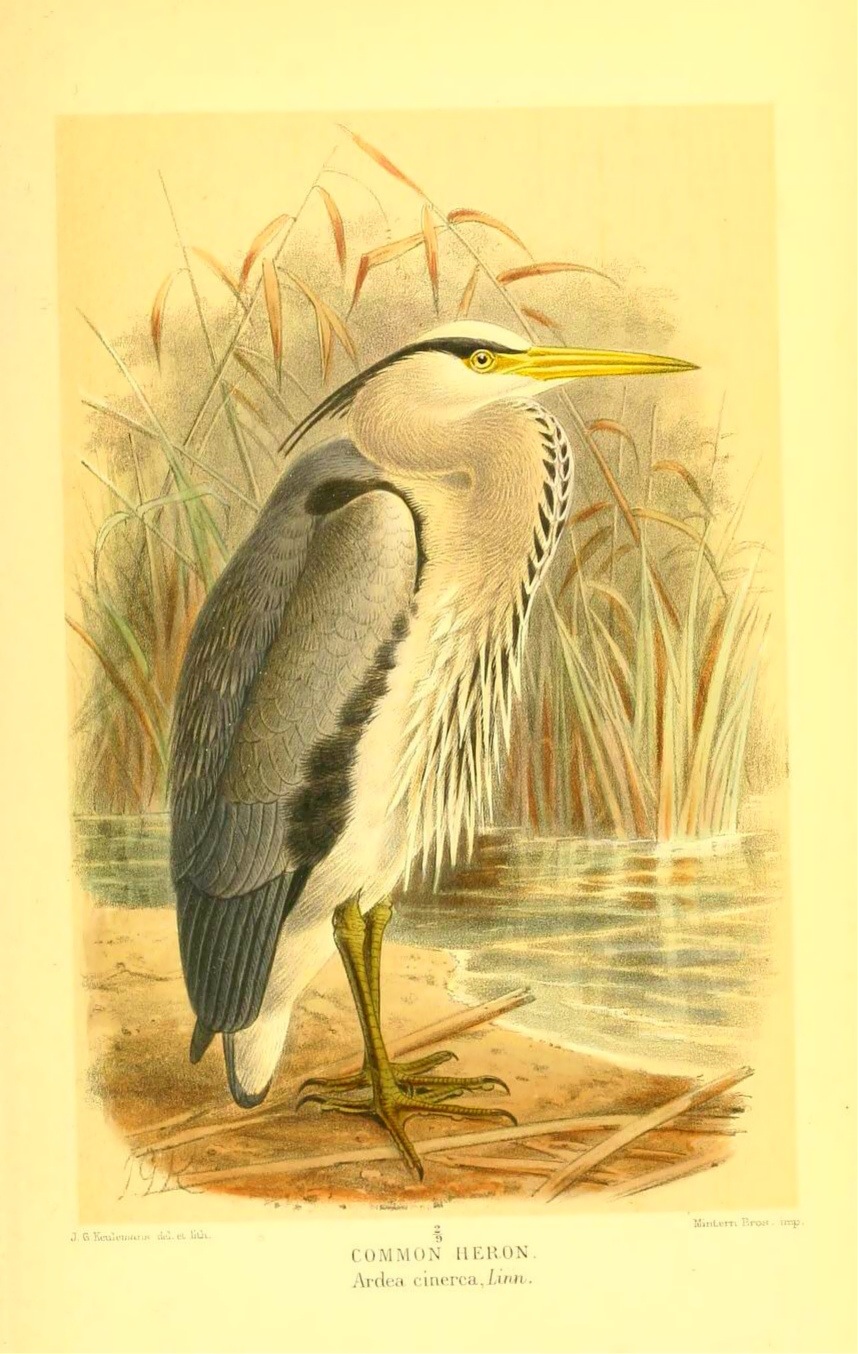 In a lovely swamp on the borders of a river lived a family of grey herons. Each one was tall and thin, with a long graceful neck and a thin pointed beak, and they were a very grave family. None of them ever smiled; they stood in the water for hours together quite silently, and every now and then they ate up something that passed by. One day the old father heron was standing near the swamp-bridge, nearly hidden by the shady papyrus which waved far over his head, when a frog hopped on to the bridge. At that moment a snake wriggled out of the grass, and stopped in front of the frog. The frog was terrified, but he pretended to be brave.
“Where are you going?” said the snake.
“I have been to the Capital to see my cousins,” answered the frog; “and I am returning to my home on the other side of the swamp.”
“What is the news in the Capital?” asked the snake.
“They have made a new law,” said the frog; “he who assaults his neighbour on the high road will be killed.”
“Really,” said the snake, laughing; “and who will kill him?”
“The King’s soldiers, who are dressed in grey barkcloth,” said the frog.
“Well, let them come,” laughed the snake, and he opened his mouth to eat the frog; but at that moment the grey heron, who had been standing silently listening to the conversation, suddenly darted forward and picked up the snake in his beak, and held him wriggling in the air.

“Didn’t I tell you,” said the frog, “that he who assaults his neighbour on the high road will be killed?”
Then the grey heron gobbled up the snake. The frog thanked him very much for saving his life, and he stayed a little while, telling him the news of the Capital.
Just then an eagle flew over the swamp carrying a large branch in his talons. Something must have startled him, for he dropped the branch; the frog saw it dropping and hopped out of the way, but he did not warn the grey heron, and the branch fell on the poor bird and broke his neck. The other herons came hurrying up and were very angry with the frog.
“Our father saved your life, you ungrateful creature,” they said, “and now you let him be killed; if ever we meet you or your children again we will kill you.”
Then they took the old grey heron away and made him a beautiful grave under the papyrus where the pink and blue water-lilies grow. And ever since that time grey herons always eat frogs.I don’t think they could ever have been great friends, even in the old days, for the grey herons are quiet, dignified birds, and the frogs have always been noisy chatterboxes, who talk all night when nice people are in bed and asleep. 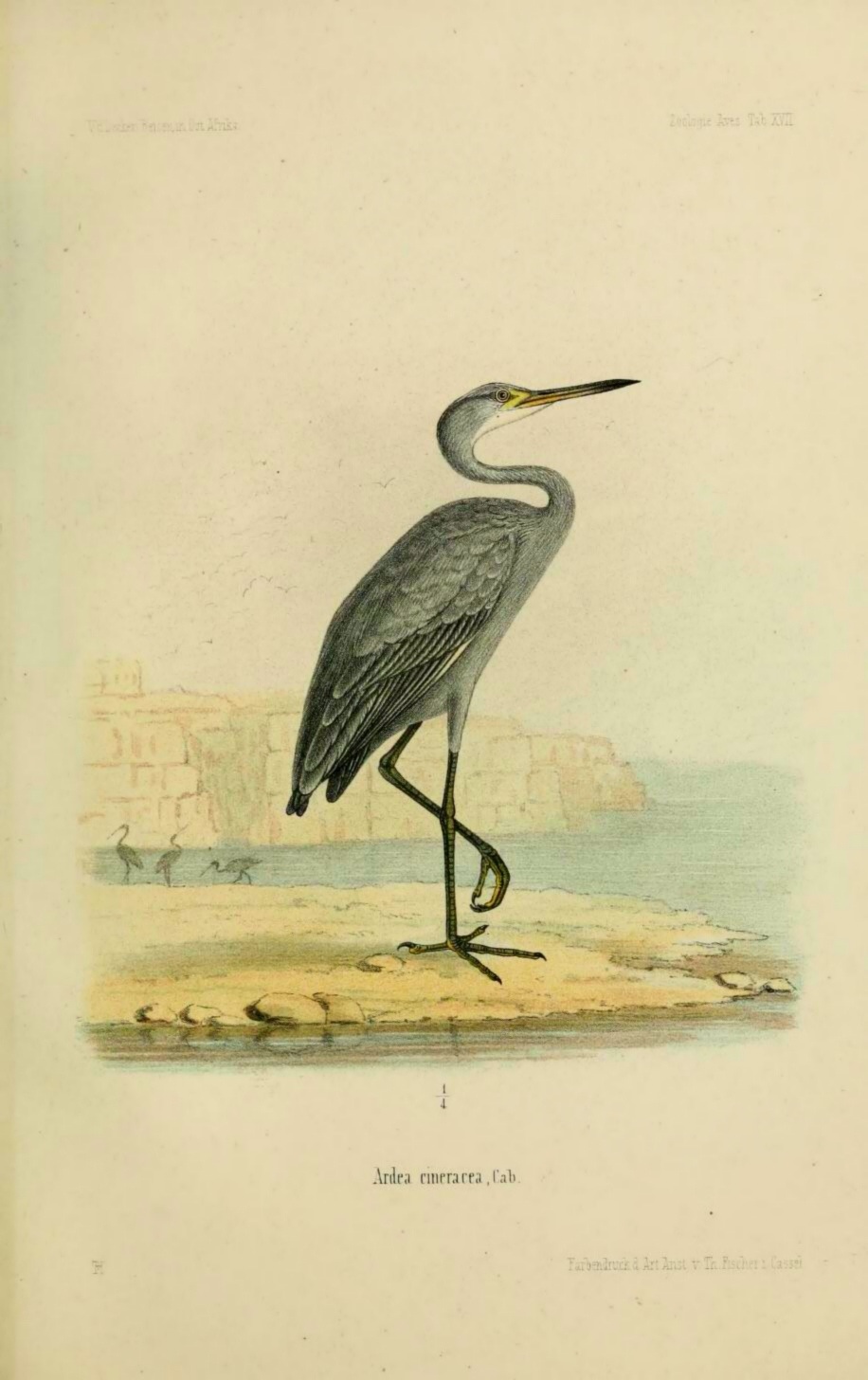