The Sahaptin tribe of Washington State tell the story of the children and the Owl. Once upon a time there were a man and a woman who had two children, a boy and a girl. One day the woman came home quite late. She was very thirsty, and asked the children to get her some water. In spite of her repeated orders, they refused to go. Finally she became very angry, and said she would flyaway. She fastened along her arms her husband’s eagle-feathers, which were hanging on the wall, and flew off.! The children cried, begging her to come back, and promised to obey her; but it was too late. She refused to return. The children wept bitterly. The children were now all alone. They had an old relative, a maker of canoes, who lived a few miles away, across the river. The girl suggested that they should go to the old man and stay there. She put the boy on her back and started off. Night fell, and the Screech-Owl, who kills everybody that comes along, and who is particularly on the lookout for children, met them on the trail. When the girl saw her, she jumped to one side, but not before the Screech-Owl had seen them. The girl said, Let us turn into worms and crawl under the grass! They did so. The Owl, however, looked for them, found their tracks, separated the grass, and saw the worms. She concluded that these must be the children. She put them into the basket that she had brought for the purpose, and started for home. She had gone but a short distance when the children made themselves very heavy. The girl shouted, “A widow’s children are burning up! A widow’s children are burning up!” The Owl heard this, and thought, “Those are surely my five children.” She hung up the basket and ran on home. Just as soon as she was out of sight, the children tried to get down. The girl kicked the basket to pieces, put the boy on her back, and made for the river. When she arrived there, she saw an old man on the opposite bank making a canoe.

She called to him to come and take them across. He paid no attention to them. They called again, and told him that the Owl was coming. The man then asked, “Are you my only grand-children?” – “We are the ones,” the girl replied. Then he stretched his foot across the river. The children stepped on it and held on very firmly, while he doubled it up and so transferred them to the other side. The Owl, in the mean time, had reached her home, and had found her children in no danger whatsoever. She went back to get the boy and the girl; but when she arrived, she found her basket broken and the children gone. She followed their tracks. The old man saw her coming. He had recognized her at a distance by her long hair. She asked him if he had seen two children pass that way.
The old man merely kept on hammering. “Why don’t you listen?” asked the Owl. The old man told her that he had eaten the children. Then she asked him to ferry her across in a canoe. The old man now decided to kill her. He told the Crawfish, the Mussel, and the Butterfly to ferry the Owl across in a thin canoe. When they reached her, they were to tell her to tie many rocks to herself in order to weight the boat properly. When they arrived at the centre of the river, the Crawfish was to split the canoe in two. The three set out. They told her to tie rocks to her body. She did as she was told, and they embarked. When they reached the middle of the river, the Crawfish, in accordance with his instructions, broke the canoe. The Owl fell into the water. She held up a stick that she had carried with her. They seized it and kept her under water until she was drowned. That is the end.

This fable is told by the Muskhogean tribe, inhabitants of the Gulf Coast. An Owl found a Perch in a little pool which had almost dried up, and caught him up to eat him. But the Perch said, “Let me sing you a song first to dance by. I am a good singer. If you will carry me along, I will tell you when we reach a spot that is open and clean, so that you can dance there well.” So the Owl picked up the Perch, and started off with him. By and by they came to a pool of water; and the Perch said, “Here is a good place. Brush it off well. After you have done that, you can dance back and forth four times. After that, you can eat me. Lay me down by the side of your path.” So the Owl brushed the place off well, and began dancing back and forth while the Perch sang. He danced three times; but when he turned the fourth time, the Perch gave a flop and went into the pool. That is how the Perch outwitted the Owl. 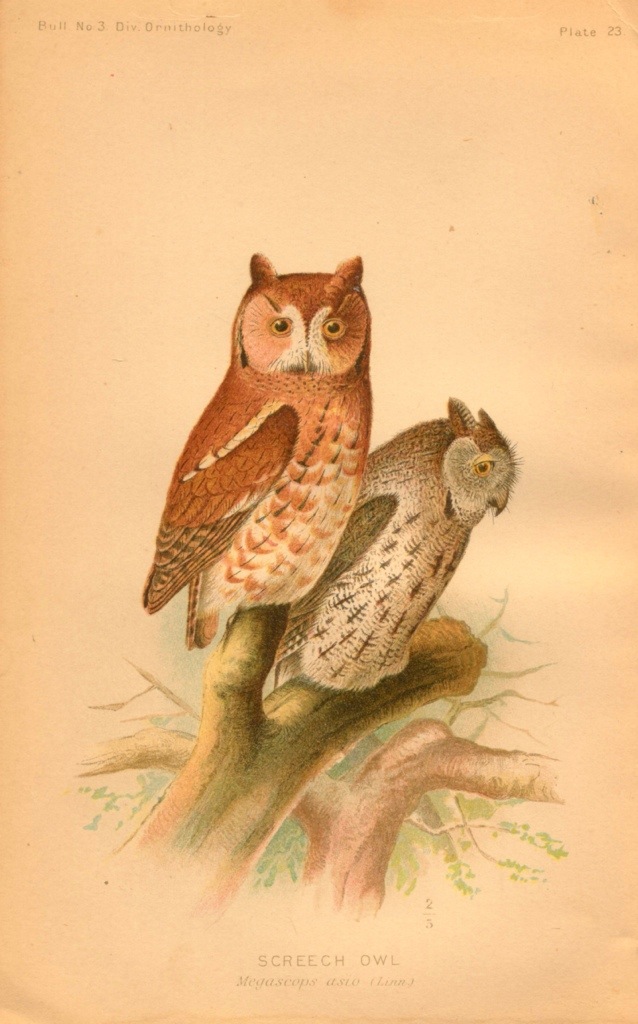 Swanton, J.R. Animal Stories from the Indians of the Muskhogean Stock” is an article from The Journal of American Folklore, Volume 26. (1913)