Source to all birds on the Planet
admin
folklore, Turnicidae
Comments

A fowler once caught a Quail. The Quail said, I know four things that will be useful for you to know. What are they? asked the Fowler. Well, said the Quail, I don’t mind telling you three of them now. The first is : Fast caught, fast keep; never let a thing go when once you have got it. The second is : He is a fool that believes everything he hears. And the third is this : It’s of no use crying over spilt milk.
The Fowler thought these very sensible maxims. And what is the fourth ? he asked.
Ah, said the Quail, you must set me free if you want to hear the fourth. The Fowler, who was a simple fellow, set the Quail free. The Quail fluttered up into a tree, and said
I see you take no notice of what I tell you. Fast caught, fast keep, I said; and yet you have let me go. Why, so I have, said the Fowler, and scratched his head. Well, never mind ; what is the fourth thing ? You promised to tell me, and I am sure an honourable Quail will never break his word. The fourth thing I have to tell you is this: In my inside is a beautiful diamond, weighing ten pounds. And if you had not let me go, you would have had that diamond, and you need never have done any more work in all your life. The Fowler fell on his face, and clutched at the grass, and began to cry. Ha, ha, ha! laughed the Quail. He is a fool who believes everything he hears. Do you think a little carcase like mine can hold a diamond as big as your head ? And even if it were true, Where’s the use of crying over spilt milk?
The Quail spread his wings. Good-bye, said he; better luck next time, Fowler. And he flew away. The Fowler sat up. Well, said he, that’s true, sure enough. He got up and brushed the mud off his clothes. If I have lost a Quail, said he, I’ve learnt something. And he went home, a sadder but a wiser man.

Ages ago a flock of more than a thousand quails lived together in a forest in India. They would have been happy, but that they were in great dread of their enemy, the quail-catcher. He used to imitate the call of the quail; and when they gathered together in answer to it, he would throw a great net over them, stuff them into his basket, and carry them away to be sold.
Now, one of the quails was very wise, and he said: “Brothers! I’ve thought of a good plan. In future, as soon as the fowler throws his net over us, let each one put his head through a mesh in the net and then all lift it up together and fly away with it. When we have flown far enough, we can let the net drop on a thorn bush and escape from under it.”
All agreed to the plan; and next day when the fowler threw his net, the birds all lifted it together in the very way that the wise quail had told them, threw it on a thorn bush and escaped. While the fowler tried to free his net from the thorns, it grew dark, and he had to go home.
This happened many days, till at last the fowler’s wife grew angry and asked her husband: “Why is it that you never catch any more quail?”
Then the fowler said: “The trouble is that all the birds work together and help one another. If they would only quarrel, I could catch them fast enough.”
A few days later, one of the quails accidentally trod on the head of one
of his brothers, as they alighted on the feeding-ground.
“Who trod on my head?” angrily inquired the quail who was hurt.
“Don’t be angry, I didn’t mean to tread on you,” said the first quail. But the brother quail went on quarreling. “I lifted all the weight of the net; you didn’t help at all,” he cried. That made the first quail angry, and before long all were drawn into the dispute. Then the fowler saw his chance. He imitated the cry of the quail and cast his net over those who came together. They were still boasting and quarreling, and they did not help one another lift the net. So the hunter lifted the net himself and crammed them into his basket. But the wise quail gathered his friends together and flew far away, for he knew that quarrels are the root of misfortune. 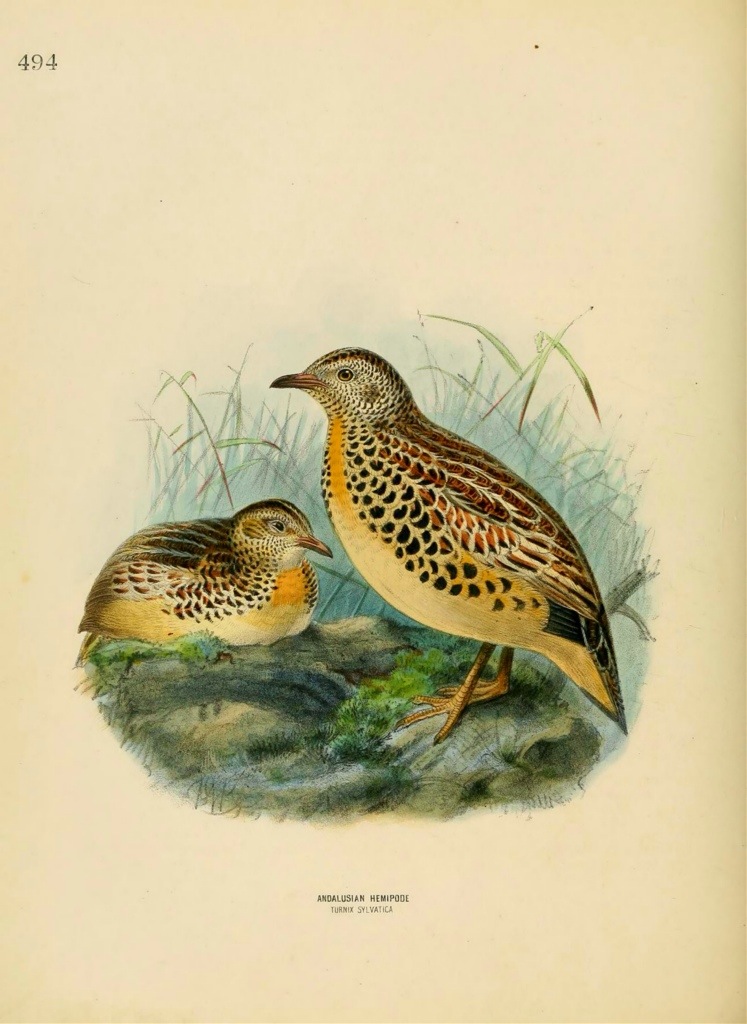