There once was a very learned Bishop, who saw a fine large nest up in an elm-tree, and when he had climbed up he saw that it was full of young Crow-chicks. One of these chicks had such a winsome appearance and took him home to the Palace.
In due time the Crow grew up, and as he heard around him continually the Bishop and his friends talking divinity, by degrees he became quite clever in divinity himself. He knew all the kings of Israel and Judah, and the cities of refuge. The fame of this learned Crow spread far and wide until at last it reached the King’s ears. Now the Bishop had been expecting this all along, and ever since he found the young Crow he had been training him for a purpose. I am sorry to say he was rather a greedy man ; and as he hoped to get something out of the King by the means of this Crow, he trained him to fly towards anything that shone bright, such as gold and silver.
When the King asks me to show off my Crow, he thought, I will ask as a price anything the Crow may choose ; and then doubtless he will fly to the King’s crown, and I shall be King !

At the first all fell out as he looked for. The King sent word to say he wanted to see the Crow. He was sitting in the garden and then asked to hear him say all the kings of Israel and Judah.
With pleasure, sire, said the Bishop; if your Majesty will deign to grant him what he chooses for a reward. He has been well taught, and will not work for nothing. Let him choose his reward, and I will give it, said the King. Then the Crow said all the kings of Israel and Judah quite right, forwards and backwards, without a single mistake. The King was delighted: he could not have done as much.
And now, sire, said the Bishop, I will let him go, and tell him to choose his crown prize.
So the Bishop let the Crow loose. The Crow was flying straight for the King’s crown, when all on a sudden he saw a dead cat! He turned off on the instant, and down he swooped on the dead cat. You know Crows eat dead things and offal; and this Crow liked a dead cat for dinner better than a gold crown. The King laughed, and said has chosen his reward, and by my royal beard, he shall have it.
But the Bishop felt very rueful indeed. All his pains and trouble lost, and nothing to show for it! He shook his head and went away, singing to himself a little chant he made up on the spot, all out of his own head: I kept my Crow in a lovely cage, but still ’tis true, whatever he may know, A dirty Crow is a dirty Crow. 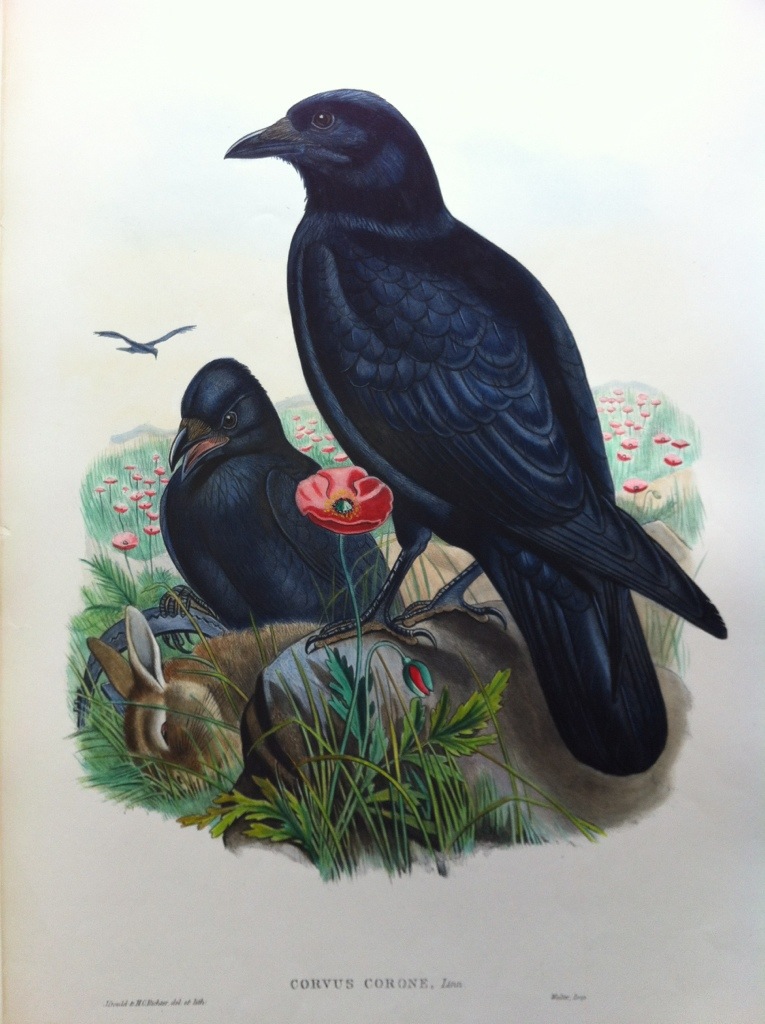 Crow was a gossip and a tell-tale. He always told people what Raven said, thus forewarning them and foiling Raven. The latter determined to punish him. He disguised himself, got a large canoe, sat in the middle of it like a big chief. He was dressed finely, and had small birds with him, acted for as servants and paddlers. They came to where Crow’s house was and Crow invited Raven in.

He asked the latter what phratry he belonged to; and he answered, “Katce’de.” Raven then asked Crow the same question; Crow said that he was chief there, answered, “I am Katce’de also.” Raven then said, “Well, then and keep me over night.” Soon Raven pulled out his tongue to a great length, and, putting a louse on the end of it, swallowed the louse, saying, “That is very sweet.” Crow thought that this was a strange act, but that he would try to do the same and put out his tongue, but could not get it very far out. It seemed much shorter than Raven’s Raven said, “Brother, I will help you.” . He took hold of Crow’s tongue and pulled it out of his head. He told him, “Now, talk!” Crow talked; but it was in a very small way, and no one could understand what he said. Raven said, “Now you are only a crow, but I am a raven. You cannot tell on me anymore.” This is why crows now talk feebly and caw, whereas ravens talk loudly and croak.