In Pawnee legends, the Kingfisher figures with the wolf. There was a wolf who was lodge brother to Manabozho. One day he went forth and returned no more, and Manabozho mourned, for he loved him. So he followed his tracks to the Big River; and he asked a kingfisher if he had seen a wolf pass that way. The bird answered, Yes Manabozho, he passed to the river, and the great serpents have him below the water. Thank you, said Manabozho. In token of my gratitude wear this, and he gave him a wampum string about his neck. And the kingfisher wears the white spot to this day. So Manabozho made war upon the serpents of the Big River and save his Wolf.

The Salishan tribe from Washington state tell this tale. Once upon a time Coyote visited Kingfisher. Since Kingfisher had no food, he went out, carrying a withe. He climbed a tree, uttered the Kingfisher’s cry, and dived through a hole in the ice. Soon he emerged, carrying a fish. He repeated this four times. He strung the fish on the withe, returned to the lodge, and cooked them for Coyote, who ate until he was satiated. On leaving, Coyote invited Kingfisher to visit him. When Kingfisher entered Coyote’s house, he saw nothing to eat. Coyote went out, and Kingfisher watched him. Coyote cut a willow withe on which to carry the fish. He fitted to his nose a long piece of pitch-wood, which was to serve as a beak. He climbed a tree overhanging a shallow hole from which he used to draw water. He uttered the Kingfisher’s cry and dived down into the hole. He broke his nose and his head in the hole. Kingfisher laughed at the bungling Coyote. Then he caught some fish for him, so that they might eat.

The Chippewa of New York tell this tale. Menabozho had a wolf who hunted for him. My brother said Menabozho, never cross the water, for the water manitous will catch you. One day the wolf was tired and saw a narrow stream in his way, so he threw the goose he had caught over his back and tried to leap across the stream. The water manitou caught him, and Menabozho had no supper and never again saw his wolf. The next day Menabozho saw the kingfisher sitting on a tree near the stream.
My brother, said Menabozho the Sly One, can you tell me where Menabozho’ s brother wolf is ? What will you give me if I tell you? said the kingfisher.
I will put a fine collar around your neck if you will tell me, said Menabozho. First put the collar around my neck, then I will tell you, said the bird. Menabozho fastened around the bird’s neck a beauti- ful white collar, which he wears to this day ; then the kingfisher told him how he had seen the wolf caught while leaping across the water the day before, and said : The great water manitou comes out when the sun is hottest to rest on the shore. He will sleep on the wolfskin. The mud turtle will sit on a stone and keep watch for Menabozho. The bear will stand by this tree and watch. I will sit on this tree and watch, too. We are all friends, but maybe you are Menabozho?
The bird jumped, but Menabozho caught its head in his hands. The kingfisher twisted his head out of Menabozho’s fingers, gave a laugh, and flew away ; and that is the way he got his ruffle. 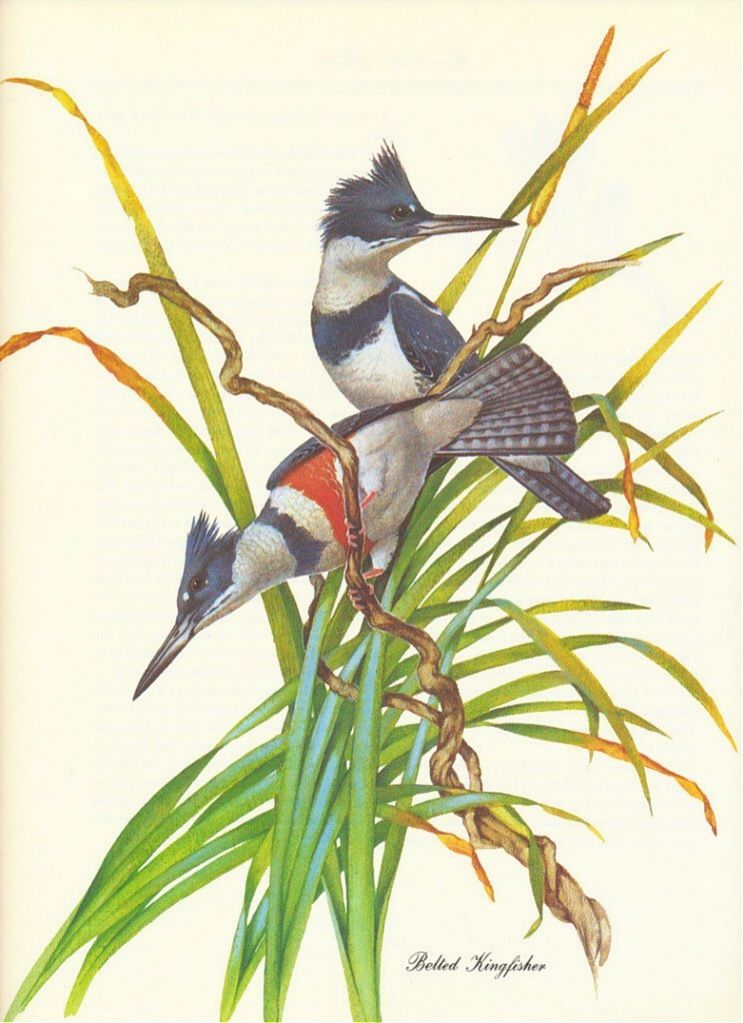