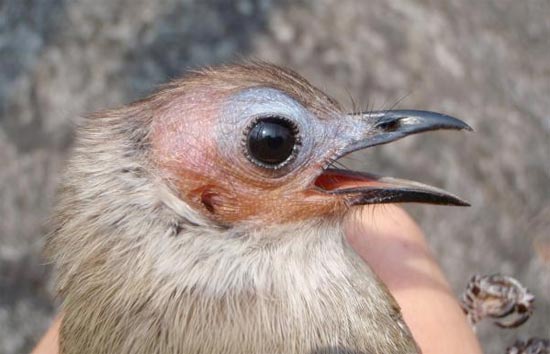 Based on distinctive morphological (plumage and skin) and vocal characters we describe a new species of bulbul from the limestone karst of central Lao PDR and place it in the genus Pycnonotus. The species is so far known from one locality in Savannakhet province and two probable earlier records from the Bolikhamxaiâ€“Khammouan provinces border area. Initial observations suggest it may represent an extreme example of habitat specificity within the Pycnonotidae and have a distribution limited to the central Indochina limestone belt of central Lao PDR and, perhaps, western central Vietnam. Further work is required to understand more clearly the distribution, ecology and behaviour of this species. However, its apparent preference for sparsely vegetated, deciduous habitats on rugged and uncultivable karst terrain may partly explain why this conspicuous species escaped detection for so long. Based on inferred distribution and apparent habitat preferences, a large proportion of the global population may occur within the Phou Hinpoun (Khammouan Limestone) and
perhaps Hin Namno National Protected Areas. The relative impenetrability of the large, cohesive areas of karst present therein should further protect against the majority of processes that currently threaten Indochinese karst birds and their habitats. Populations on isolated outcrops are expected to be more at risk.
An odd songbird with a bald head living in a rugged region in Laos has been discovered by scientists from the Wildlife Conservation Society (WCS) and the University of Melbourne, as part of a project funded and managed by the mining company MMG (Minerals and Metals Group).
The species has been named Bare-faced Bulbul Pycnonotus hualon because of the lack of feathers on its face and part of its head, it is the only example of a bald songbird in mainland Asia. It is the first new species of bulbul â€“ a family of about 130 species â€“ described in Asia in over 100 years. A description of the new species has been published in the July issue of Forktail, the journal of the Oriental Bird Club.
The thrush-sized bird is greenish-olive with a light-colored breast, a distinctive featherless, pink face with bluish skin around the eye extending to the bill and a narrow line of hair-like feathers down the centre of the crown.
The bird seems to be primarily tree-dwelling and was found in an area of sparse forest on rugged limestone karsts â€“ a little-visited habitat known for unusual wildlife discoveries.
First seen by scientists over 15 years ago, the Bare-Faced Bulbul has evaded discovery due to its remote location and seemingly outrageous appearance. It is only known to live in the sparse, deciduous forest on limestone karsts in central Laos, where it was originally discovered. In 1995, R.J. Timmins saw the bare-headed birds pass overhead, but after relating the sight to the rest of the group, he â€œsubsequently weathered a fair amount of good-natured ribbing on relating the sighting to sceptical colleaguesâ€. Scientists continued to think little of this unusual bulbul species until 2008, when Timmins sighted the species again, and described it in full. It is possible that other populations of the species may be living in karst areas of Thailand and Vietnam, however the unique habitat of that specific Lao region makes separate populations unlikely. In addition, the birdâ€™s distinctive appearance suggests that, if other populations do exist, we would have found them by now! If the Bare-Faced Bulbul is indeed only found in central Laos, it would be the countryâ€™s only endemic bird species discovered. The species is distinguished from other bulbuls by its appearance and vocalizations. Unlike other species, Bare-Faced Bulbul lacks feathering on the face and the side of the head, and has extensive pale blue skin on the rear of the head and around the eyes. Its most common vocalizations consist of â€œa short series of whistled, dry bubbling notesâ€. Its tendency toward karsts makes this species safe from habitat-loss in the short-term, as limestone formations with suitable habitat are protected under Lao national law. Thus, chances are high that
the majority of Bare-Faced Bulbuls are currently residing within protected areas. However, such limestone habitats are threatened in the long-term by factors such as quarrying and habitat conversion. There is currently insufficient data for this species to be included on the IUCN Red List. The bird is the first bulbul discovered in Asia in a century, and is Asiaâ€™s only known species of bald songbird.