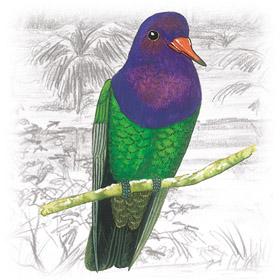 The White-chinned Sapphire have a straight red bill with black tip. A dark blue forehead, crown, cheeks and throat, a coppery rump and green flanks.

Listen to the sound of White-chinned Sapphire

The White-chinned Sapphire is distributed in the Amazon and Orinoco Basins with disjunct populations around Lake Maracaibo, along the coast of south-east Brazil and into north-east Argentina. In Suriname numerous in the coastal region and savanna.

It is found in forest edges, gallery forest, white sand forests and restinga

The nest is a small cup made out of plant fibres. It is built between 1-4 meters up in a tree on a horizontal branch. Clutch size is 2 eggs incubated by female and lasts 14-15 days, young fledge after 20-26 days.

Nectar of flowering shrubs, during flowering season tree flowers in canopy are visited. Catches insects by hawking and spiders by tree-gelaning. Feeding territory is defended aggressively by male. Feeds at all heights from ground to canopy, sometimes in small groups.

This species has a large range, with an estimated global extent of occurrence of 7,000,000 km2. The global population size has not been quantified, but it is believed to be large as the species is described as ‘frequent’ in at least parts of its range (Stotz et al. 1996). Global population trends have not been quantified, but the species is not believed to approach the thresholds for the population decline criterion of the IUCN Red List (i.e., declining more than 30% in ten years or three generations). For these reasons, the species is evaluated as Least Concern