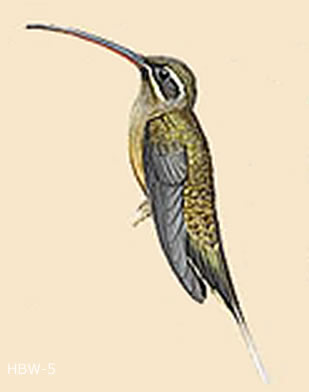 The Great-billed has two distinctive physical characteristics, a long curved bill measuring, and a long tail. like other Phaethornis sopecies the brownish yellow stripes above and belong the eye surounding a dark patch are conspicuous. The feathers blend from a dark bronzy-brown head, to a white tipped tail. The female has a smaller wing span and weighs less than the male. The young are identified by grey feathers at the base of the neck and on their back. The throat and chest are dark-grey, undertail overts dark buff, belly buff. rectrices pale buff, upper bill black, lower bill red.

Listen to the sound of Great-billed Hermit

The female Great-billed hermit lays two eggs in a small densily contructed cup nest with a tail, made of rootlets and attached to the underside of a palm, fern or Heliconia leaf. Clutch size 2 eggs incubated by female only for about 14-16 days. Young fledge after about 20-23 days.

Diet consists of nectar of flowers and sometimes anthropods.

This species has a large range, with an estimated global Extent of Occurrence of 3,400,000 km
← Previous Post
Next Post →