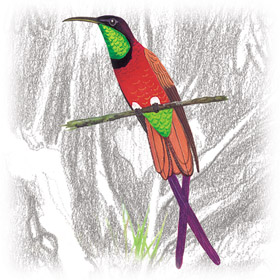 Very distinctive bird, not likely to be confused. The male has long elongated tail feathers which cross halfway down, a conspicuous golden-yellow throat patch and metallic red belly. Upperparts crimson and underparts mostly brown changing to red, tail is cinnamon. Belly The female is quite different and mostly glossy green. Legs and slightly curved half long bill black.

Listen to the sound of Crimson Topaz

It is found in Brazil, Colombia, Ecuador, French Guiana, Guyana, Peru, Suriname, and Venezuela. Largest hummingbird to be found in Suriname, only the Giant Hummingbird (Andes) is larger in this family.

Found in lowland forest near granite outcrops and gallery forest along rivers and creeks. Molty high up in canopy.

Nest is fairly small for this relatively large species, it is cup shaped and mde ou of plant material. usually built on a vertical branch of a vine near or above water. Clutch size 2 eggs, incubated by female, duration unknown. young stay with parents for about 3 weeks after their fledging period of about 21 days. Breeds first in second year.

Their food is nectar, taken from a variety of shrub and high tree flowers, and some small invertebrates which are caught by hawking often high above canopy. In Suriname also ifound foraging low on flowers.

Sedentary during the breeding period. After breeding may disperse following flowering season