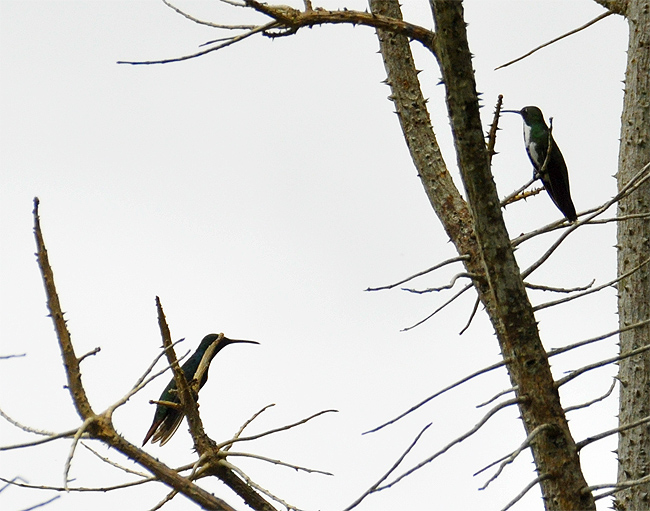 The male has glossy bright green upperparts. His throat and chest are matt black, bordered with blue-green. The flanks are bright green, and the black of the chest tapers onto the belly.
The female Black-throated Mango has bronze-green upperparts and white underparts with a black central stripe. Immature birds show some grey or buff feather tips on the head and wings, and have brown around the eyes.

Listen to the sound of Black-throated Mango

The Black-throated Mango breeds from Panama south to northeasterm Bolivia, southern Brazil and northern Argentina. It is also common on both Trinidad and Tobago.

The female Black-throated Mango lays two white eggs in a tiny cup nest 8-15 meter highon a usually bare branch. Incubation by the female is 16 or 18 days, and fledging another 24 days. Young stay with female after fledging for another 3-4 weeks. 2 broods.

The food of this species is nectar, often taken from the flowers of large trees. This hummingbird is also notably insectivorous, often hovering in open areas to catch flying insects.

This species has a large range, with an estimated global extent of occurrence of 9,900,000 km2. The global population size has not been quantified, but it is believed to be large as the species is described as ‘frequent’ in at least parts of its range (Stotz et al. 1996). Global population trends have not been quantified, but the species is not believed to approach the thresholds for the population decline criterion of the IUCN Red List (i.e., declining more than 30% in ten years or three generations). For these reasons, the species is evaluated as Least Concern.