Source to all birds on the Planet
admin
Anatidae, Anseriformes, Pacific Ocean
Comments 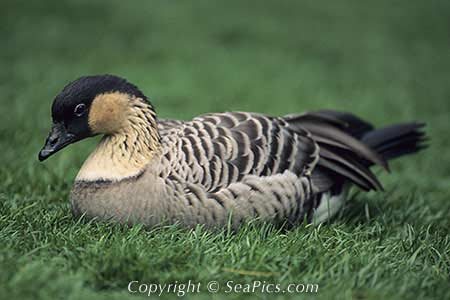 The black geese of the genus Branta are waterfowl belonging to the true geese and swans subfamily Anserinae. They occur in the northern coastal regions of the Palearctic and all over North America, migrating to more southernly coasts in winter, and as resident birds in the Hawaiian Islands. Alone in the Southern Hemisphere, a self-sustaining feral population derived from introduced birds of one species is also found in New Zealand. one species has been described from subfossil remains found in the Hawaiian Islands, where it became extinct in prehistoric times. Another undescribed prehistoric species from the Big Island of Hawaii was extremely large and flightless; it is tentatively assigned to this genus due to being very peculiar. It is fairly certain that at least another species of this genus awaits discovery on the Big Island, judging from the facts that at least one species of Branta was found on every major Hawaiian island, and that remains of such birds have not been intentionally searched for on the Big IslandThe relationships of the enigmatic Geochen rhuax to this genus are unresolved. It was another prehistoric Big Island form and remains known only from some parts of a single bird’s skeleton, which were much damaged because the bird apparently died in a volcanic eruption, with the bones being found in an ash-filled depression under a lava flow. A presumed relation to the shelducks proposed by Lester Short in 1970 was generally considered highly unlikely due to that group’s biogeography, but more recently, bones of a shelduck-like bird have been found on Kauai. Whether this latter anatid was indeed a shelduck is presently undetermined. Several fossil species of Branta have been described. Since the true geese are hardly distinguishable by anatomical features, the allocation of these to this genus is somewhat uncertain. A number of supposed prehistoric grey geese have been described from North America, partially from the same sites as species assigned to Branta. Whether these are correctly assigned, meaning that the genus Anser was once much more widespread than today and that it coexisted with Branta in freshwater habitat which it today does only most rarely, is not clear. Especially in the case of B. dickeyi and B. howardae, doubts have been expressed about its correct generic assignment

Listen to the sound of Nene

In 1949, the remaining populations on Hawaii inhabited rocky, sparsely vegetated, high volcanic slopes. Following habitat loss and alteration for agriculture, the optimal habitat is now apparently grassland, where there is an abundance of high protein food, adjacent to natural scrubland nesting areas. Breeding success and productivity are currently low except on Kauai. In recent studies less than 10% of all breeding-age females successfully bred, although this may not be the case on Kauai.

Pairs mate for life and engage in relatively simple courtship displays in which the male attacks or threatens potential competitors, runs back to his mate, and calls loudly. Nene have an extended breeding season and eggs can be found in all months except May, June, and July, although the majority of birds nest between October and March, and most clutches are laid between October and December. Nene nests consist of a shallow scrape, moderately lined with plant materials and down. Pairs typically return to previous years? nests sites, typically in dense vegetation; when available, kipuka (an island of vegetation surrounded by lava) may be preferred. Females lay between three and five eggs which hatch after 30 days. Young are precocial and are not fed by their parents; however, young remain with their parents for up to one year. Family groups begin flocking soon after the young are able to fly and remain in the breeding grounds for about a month. They wander about searching for food after that.

The Nene’s vegetarian diet consists of seeds of grasses and herbs as well as leaves, buds, flowers and fruits of various plants. The Nene does not appear to need fresh water but will use it when available. Although Nene are found mostly in the rugged lava fields of the Big Island, this is probably the only place they have survived rather than their preferred habitat.

While the overall population of this species has increased from a low of perhaps just 30 birds in the mid-1900s to over 1,700 individuals in 2006, this growth is partly maintained by the regular release of captive-bred individuals. The majority of the population outside Kaua`i does not breed successfully in the wild, so the effective population size is very small and consequently the species is listed as Vulnerable.
The development of agricultural systems by the Polynesians, and later by European settlers, resulted in the extensive loss and alteration of habitat. A lack of suitable habitat, especially for rearing young, is the most important limiting factor, combined with predation by the introduced small Indian mongoose Herpestes auropunctatus (except on Kauai), dogs, cats, pigs and rats. Other threats include disease and parasites, inbreeding depression, loss of adaptive skills in captive-bred birds and dietary deficiencies. Feral cats carry a protozoan organism Toxoplasma gondii which causes toxoplasmosis, a disease that can be fatal in the species18. Road-kills are an important threat on Hawaii and probably on Maui.