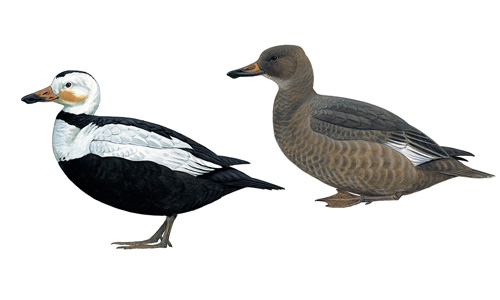 The Labrador Duck is one of the most mysterious of North American birds. It was always uncommon, shy and wary and for these reasons seems to have been little affected by shooting. Reasons for its extinction are unknown but one school of thought suggests that it was a very specialized feeder unable to cope with the vast changes to the environment that came about as a result of European settlement.

This idea is, perhaps, supported by the slightly aberrant development of the bill which shows a curious softness around the edges. The species occupied the eastern seaboard of North America where it seems to have ranged from Labrador, in which area it may have spent the summer months, down to Chesapeake Bay. Nesting grounds were never reliably located; they may have been in Labrador or on islands in the Gulf of St Lawrence. Several eggs exist that are attributed to the species, but all are of doubtful provenance.

Labrador Ducks seem to have declined rapidly after 1840 and the last sighting of the species dates from the 1870’s. A specimen was apparently taken from Long Island waters during 1875 and another individual was allegedly shot near Elmira, New York, during 1878.