The Bufflehead Bucephala albeola is Canada’s smallest diving duck. Strikingly patterned in black and white, and constantly active, it attracts attention out of proportion to its relatively small numbers.

Buffleheads are compactly built birds, with males, or drakes, averaging 450 g in weight and females about 340 g. During their migrations they are much heavier, with up to 115 g of stored fat as fuel for their travels. Hunters sometimes call these fat birds “butterballs.”

Adult males are black above and white below, with bright pink feet. They wear a white “shawl” around the back of the head, and a broad white band extends from front to back across each wing. The females and first-year males are more drab, with the dark areas sooty-grey or brownish rather than black, and the white areas duller and smaller in size than in adult males. Like their near relatives, the goldeneyes and mergansers, Bufflehead males do not attain adult plumage until their second winter, and first breed when nearly two years old.

Listen to the sound of Bufflehead

During the breeding season, the Bufflehead is found primarily within the boreal forest. where it nests in tree cavities withinlarge diameter poplar and aspen trees near small permanent freshwater ponds. During migration and in winter, the species frequents inland lakes and rivers but occurs in highest numbers in sheltered saltwater bays and coves along the Atlantic and Pacific coasts.

Buffleheads reach sexual maturity when they are about 2 years old. Pair bonds form during the first half of April (during spring migration) and they usually keep the same mate for years. During courtship, the male often puts on an extensive display. There are various displays he will initiate, but a common “dance” is the drake swimming with the bill up, neck stretched out, and head puffed to twice its normal size to show off its white head patch. He then might stand almost erect with his bill against his swelled breast, followed by a quick dive under the female. Throughout the display, there is much head bobbing and body movement from this energetic little duck.Buffleheads nest almost exclusively in tree cavities, and can squeeze through holes as small as 2.24 inches in diameter. The most common source of these cavities is old Northern Flicker holes that are often located 2-10 feet above the ground in poplar trees up to 200 hundred yards away from water. This eliminates most competition with other cavity nesters such as the Common Goldeneye; however, European Starlings and Northern Flickers still compete with Buffleheads for these nesting sites. Once females have successfully nested, many females will return to the same tree annually to nest.Nest initiation takes place between early May and mid May. Commonly, 10-14 eggs are laid and incubated for 28 – 33 days. Partway through incubation, the male will leave and gather with other post-breeding males for the wing molt. Buffleheads generally have high nest success, and the newly hatched young will spend 24 – 36 hours in the nest before jumping to the ground, where the hen will then lead the brood to nearby water. When ducklings are 5 – 6 weeks old, the female will leave, often before their first flight, which occurs at 50 – 55 days.

Buffleheads feed by diving into sheltered, shallow water. Only the downy young will dabble at the surface. Buffleheads will feed in open water and along edges of emergent vegetation, preferring not to dive through emergent or dense submergent vegetation. They will commonly remain under water for 15-25 seconds with pauses of 5-10 seconds between dives. During the non-breeding season, Buffleheads dive and feed as a group. Invertebrates such as dragonflies, caddis flies, water boatmen, damselflies, mayflies, nymphs and midge larvae dominate the Bufflehead’s summer diet. Buffleheads wintering in saltwater areas feed primarily on crustaceans, mollusks, and fish.

This species has an extremely large range, and hence does not approach the thresholds for Vulnerable under the range size criterion (Extent of Occurrence <20,000 km2 combined with a declining or fluctuating range size, habitat extent/quality, or population size and a small number of locations or severe fragmentation). The population trend appears to be increasing, and hence the species does not approach the thresholds for Vulnerable under the population trend criterion (>30% decline over ten years or three generations). The population size is extremely large, and hence does not approach the thresholds for Vulnerable under the population size criterion (<10,000 mature individuals with a continuing decline estimated to be >10% in ten years or three generations, or with a specified population structure). For these reasons the species is evaluated as Least Concern.
Buffleheads occur from coast to coast, though they are seldom numerous. In spring and summer, most breed in British Columbia east of the coast ranges and in the northern half of Alberta, although small numbers occur east to Ontario or even Quebec, and north to the southern parts of Alaska, Yukon, and Mackenzie. In winter, they are common on Canada’s west coast and regular in favoured spots around Lake Ontario and the southern coasts of New Brunswick and Nova Scotia. However, the majority winter in the United States, from New Jersey to North Carolina in the east, and from Washington to central California in the west.

The main migration to wintering areas begins in late October. Buffleheads travel and generally remain in small flocks of 5-10 birds, but can occasionally gather into groups of as many as 50 and, in fall, flocks of up to 500 birds have been recorded. The majority of the population winters on the Atlantic coast, from southern Newfoundland to southern Florida; and on the Pacific coast, from the northern tip of the Aleutian Islands to Mexico.
Occasionally further S; has occurred Greenland, NE Siberia, Hawaii and Japan; also NW Europe (mainly Britain). 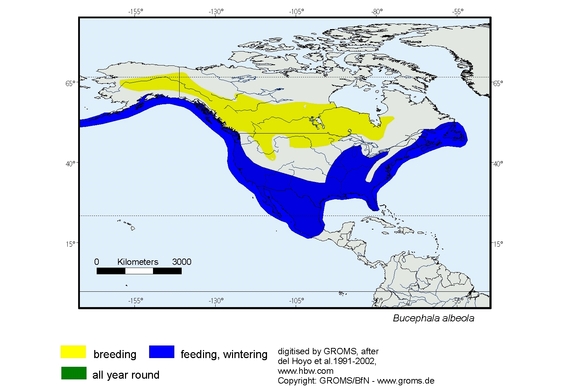