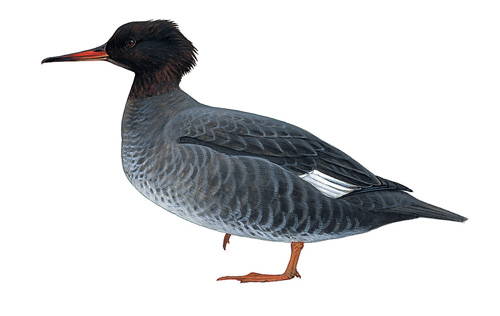 The Auckland Islands lie some 320 km south of New Zealand and this rather forlorn group was once home to a species of merganser that, while not entirely flightless, showed a marked reduction in wing size compared with its relatives. As often happens when birds develop in evolutionary backwaters (i.e. areas without mammalian predators), the adults begin to resemble the immature stages of their relatives and this is just what was happening in the case of this merganser. Similarly, and typically, its chicks were showing none of the distinctive patterning shown in related species.

The Auckland Merganser was first discovered in 1840 during a French exploratory visit to New Zealand waters. Two French corvettes, L’Astrolabe and La ZelEe, arrived at the rarely visited and remote Auckland Islands, and some of the crew collected specimens. A Lieutenant Charles Jacquinot obtained a merganser and published a description of it, jointly, with ship’s surgeon, Jacques Hombron. No further examples were spotted for 30 years or so, but then the species was seen on a number of occasions until the year 1902, after which time it vanished. The most extraordinary aspect relating to this species lies, perhaps, in its range. Five kinds of merganser exist north of the equator, a sixth inhabits parts of Brazil but none – other than this one – occurs anywhere near the Auckland Islands.

Bones found in Polynesian kitchen middens indicate that the species once occurred on the main islands of New Zealand. The reasons for its extinction are unknown, although some reports suggest that individuals were prone to hide among rocks when pressed, rather than take to the water and dive like their European counterparts. Such a defensive strategy obviously did not work well against man and the predatory mammals he introduced.