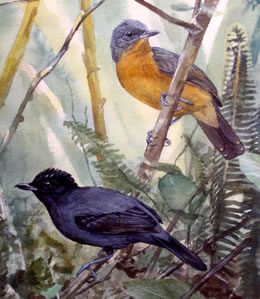 The Acre Antshrike (Thamnophilus divisorius) is a member of the antbird family (Thamnophilidae). Its closest relatives are the Streak-backed Antshrike and the Amazonian Antshrike (Whitney et al. 2004). It was discovered in 1996 in the Acre Arch uplands in the state of Acre in Brazil, and described as a species new to science in 2004. It is found in low-growing woodland. Its known range lies within the remote Parque Nacional da Serra do Divisor in Brazil and the adjacent Parque Nacional de la Sierra del Divisor in Peru, but it is believed to be common there. It has only recently been evaluated by BirdLife International where it has been given a status of Least Concern for the 2007 Red List.
Thamnophilus divisorius was recently described from within the Parque Nacional da Serra do Divisor, Acre, Brazil. This large and relatively well protected area contains the sole known locality for this species, the Serra da Jaquirana, the easternmost of a series of narrow ridges in the Serra do Divisor, part of the Acre Arch. It favours stunted ridge woodlands with a broken canopy and thick understorey growing on very thin soils. It may occur on physiognomically similar ridges within the Acre Arch perhaps extending to the continuous Aierra Contamana in Ucayali, Peru. Given that the species is conspicuous, the lack of records from structurally favourable “Amazon Caatinga” habitats c. 100 km east-southeast of the type locality suggests it is absent from that area. Despite its restricted known range, this species is common within that range and apparently faces no immediate threats. Whitney, Bret M.; Oren, David C. & Brumfield, Robb T. (2004): A new species of Thamnophilus Antshrike (Aves: Thamnophilidae) from the Serra do Divisor, Acre, Brazil. Auk 121(4): 1031-1039.
download discovery article
← Previous Post
Next Post →