Source to all birds on the Planet
admin
Accipitridae, Accipitriformes, North America
Comments 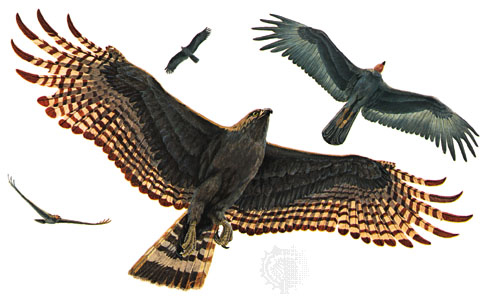 Entirely black plumage. Paler, barred, flight feathers. Yellow legs and cere. Long, broad, dark tail with white bands (adults have 3 or 4). Hooked beak. Wings held in a shallow V during flight. Immatures have scattered white spotting on its underparts and narrow greyish tail bands. Sexes similar. The females are slightly larger than the males. 46 to 53 cm in length. The Zone-tailed Hawk is believed to mimic the V-shaped wing pattern of the Turkey Vulture to take advantage of prey that is desensitized to the presence of vultures. Alternatively, the V-shaped wing pattern may simply help stabilize the bird during low flight over rough terrain. Swooping on prey from up to 105 meters above the ground, the Zone-tailed Hawk primarily feeds on small birds, small mammals, amphibians, and reptiles.

Listen to the sound of Zone-tailed Hawk

The nest is made from sticks and built in a tall tree or cliff. Female zone-tailed hawks lay one or two eggs per clutch. In the southwestern United States, these hawks are known to breed only once, but not much is known about their breeding habits in South America except that year-round residents breed only once. Young are semi-altricial at hatching, with grey down. The female parent incubates for about 5 weeks while the male parent collects food for the female and young. Growth is gradual to slow during first 7 days; from days 7-21, growth is rapid. Cases of siblicide have been documented. Male and female hawks are very aggressive when guarding the nest. They are aggressively territorial when nestlings are present.

The diet of the zone-tailed hawk includes many small vertebrates (birds, especially passerines; mammals, especially ground squirrels and chipmunks; amphibians and reptiles, particularly the common collared lizard and crevice spiny lizard; rarely fish). Prey that is exposed and becomes conditioned to the harmless presence of turkey vultures is likely prey of the zone-tailed hawk.

Northernmost birds mostly migratory but some individuals overwinter at North limit of range. In Panama, most birds migrants, but reports throughout year suggest a resident breeding population may have developed. Birds in South America have been claimed to be migrants from North, but species regularly breeds in Venezuela, and perhaps on Trinidad; status of birds further South requires confirmation.