Source to all birds on the Planet
admin
Accipitridae, Accipitriformes, South America
Comments 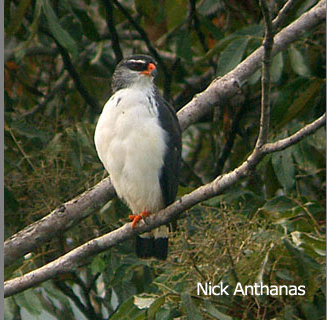 Members of the genus Leucopternis are small to medium-sized buteonine hawks with short and rounded wings and a moderate length tail. In some species the sides of the head are partly bare of feathers and brightly coloured, as are the legs. P1umage pattern is quite simple; immatures are similar to adults. This large genus is placed between Buteo and Buteogallus, and contains ten species, all tropical American.

The White-browed Hawk is distinctive in Amazonia with an all black back and head with some white mottling, and white below with an obvious white supercilium.

Listen to the sound of White-browed Hawk

The White-browed Hawk is a denizen of the interior of humid lowland forest in southern Amazonia.

It is very poorly known with very limited information on its breeding or natural history. A nest was about 15 m high in the fork within the subcanopy of a canopy height tree in terra firme forest with a dense understory. The nest was “an untidy, near-hexagonal structure constructed of sticks and some smaller twigs, and lined with a handful of dead leaves on its outer walls.”

A snake and a lizard are the only confirmed prey in its diet. IN Bolivia, one was captured when it descended on a woodcreeper from a net, and its stomach contained the remains of several small birds.