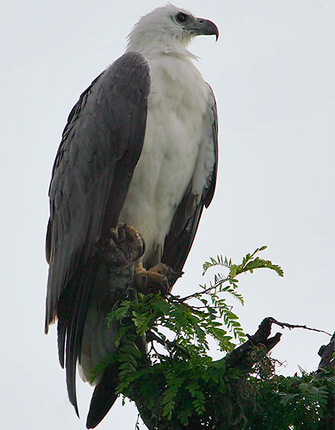 Members of the genus Haliaeetus are large to very large eagles, with long, broad wings and medium to short rounded or wedge-shaped tails. The bill is large, strong and compressed. The legs are short and the toes and talons powerfully developed

The White-bellied Sea-Eagle is a mainly a white and black (dark grey) bird. White on the head and underneath (belly) and the leading front of the wings and black (dark grey) on their back and the back half of the wings. The tail is wedge shaped, mainly dark grey with a whitish tip Females are slightly larger than males. Their hooked bill is dark and their legs are a creamy colour with long black talons which with tiny spikes in the soles of their feet they use in grasping slippery fish. etc Their voice has been described as “loud deep goose-like honking”
Juveniles (young sea eagles) are a speckled brown

Listen to the sound of White-bellied Sea Eagle

Oriental Region, Australasia : India to Tasmania. The coasts of India and Sri Lanka east to South China, and south to Australia and Tasmania, the New Guinea and Bismarck archipelagos.

This bird is most frequently seen by the sea coasts of the South Asian continent and the islands, and the coast of Australia, but it is also to be found up the major waterways for some distance. It goes further up such waterways and rivers in open country than in forested areas; in Borneo not more than 15 km.

It builds its nest on a high tree or sometimes on a rock. It is a large structure, that both help to build and into which two, or occasionally three eggs are laid. Incubation is carried out mainly by the female, with occasional relief by the male for around 50 days. The young are tended by the female for 65-70 days until fledging takes place, and it is not unusual for two young to be successfully reared. Independence comes about 6 months later.

The White-bellied Sea Eagle is an opportunistic carnivore and consumes a wide variety of animal prey, including carrion. It often catches a fish by flying low over the water and grasping it in its talons. It prepares for the strike by holding its feet far forward (almost under its chin) and then strikes backwards while simultaneously beating its wings to lift upwards. Generally only one foot is used to seize prey. The White-bellied Sea Eagle may also dive at a 45 degree angle from its perch and briefly submerge to catch fish near the water surface. While hunting over water on sunny days, it often flies directly into the sun or at right angles to it, seemingly to avoid casting shadows over the water and hence alerting potential prey. About to seize waterborne preyThe White-bellied Sea Eagle hunts mainly aquatic animals, such as fish, turtles and sea snakes, but it takes birds, such as Little Penguins, Eurasian Coots and shearwaters, and mammals as well.[In the Bismarck Archipelago it has been reported feeding on two possum species, the Northern Common Cuscus and Common Spotted Cuscus. It is a skilled hunter, and will attack prey up to the size of a swan. They also feed on carrion such as dead sheep, birds and fish found along the waterline, as well as raiding fishing nets and following cane harvesters. They harass smaller raptors such as Swamp Harriers, Whistling Kites, Brahminy Kites and Ospreys, forcing them to drop any food that they are carrying.[12][36] Other birds victimised include Silver and Pacific Gulls, cormorants and Australasian Gannets. There is one record of a White-bellied Sea Eagle seizing a gannet when unsuccessful in obtaining its prey. They may even steal food from their own species, including their mates. The White-bellied Sea Eagle attacks these birds by striking them with outstretched talons from above or by flying upside down underneath the smaller predator and snatching the prey, all the while screeching shrilly. Southern Fur Seals have also been targeted for their fish. White-bellied Sea Eagles feed alone, in pairs, or in family groups. A pair may cooperate to hunt. Prey can be eaten while the bird is flying or when it lands on a raised platform such as its nest. The White-bellied Sea Eagle skins the victim as it eats it. It is exceptionally efficient at digesting its food, and disgorges only tiny pellets of fragmented bone, fur and feathers.

Sedentary, with the young dispersing after the breeding season.