Source to all birds on the Planet
admin
Accipitridae, Accipitriformes, Eurasia
Comments

The Sparrowhawk is about the same size as a Kestrel and has a similarly long tail but its wings have rounded not pointed tips and are shorter as if not fully extended. Whether soaring or gliding, Sparrowhawks have a characteristic flap-flap-glide action

Listen to the sound of Sparrowhawk

Eurasia : widespread. The sparrowhawk (Accipiter nisus) has a wide distribution throughout Eurasia and North Africa. It breeds in warm temperate and sub-tropical zones, from steppe to tropical broadleaf forest, from Ireland to Japan and as far south as the Mediterranean.

Breeds and winters in woodland, particularly coniferous, and also occurs in winter in farmland and even gardens

Eggs from late April or early May in Britain and north-west Europe. Up to 2 weeks earlier in southern Europe and 2-3 weeks later in northern parts of range.
The nest is build in the fork of tree, often close to trunk where 2 or 3 branches start at same level. Also on horizontal branch, usually in lower parts of main canopy. Conifers are preferred where available. Selected tree usually close to path or clearing for convenient access. A new nest is built each year, sometimes on foundation of old nest of Woodpigeon or other species, though normally close to previous nests. The nest is a loose structure of twigs with deep cup. Nest size varies with position in tree, with nests in forks built up until surface area is large enough. Twigs up to 60 cm long are used, during laying, lined with fine twigs or bark chips. The clutch size is 4-6 (3-7) and the incubation lasts 33-35 days per egg, average 39-42 days for complete clutch. The young fledge after 24-30 days, males before females.

The sparrowhawk is a specialist feeder, as its name suggests. It takes birds of varying sizes, from finches and sparrows, to the size of wood pigeons.
It does on occasions take small rodents and other small land based prey, but birds account for well over 90% and maybe as high as 98% of their diet.

Migratory in northernmost parts of Europe and in most of Asia. Partially migratory in Central Europe. Sedentary in South of range. Various Central European countries receive Northern migrants, some of their breeding birds possibly migrating further South, reaching Mediterranean countries. Most migration actually from North-East to South-West. Few migrants reach Africa, although some birds winter in North Africa and sub-Saharan Africa, occasionally South to Kenya and Tanzania. Siberian population winters in South and South-East Asia. 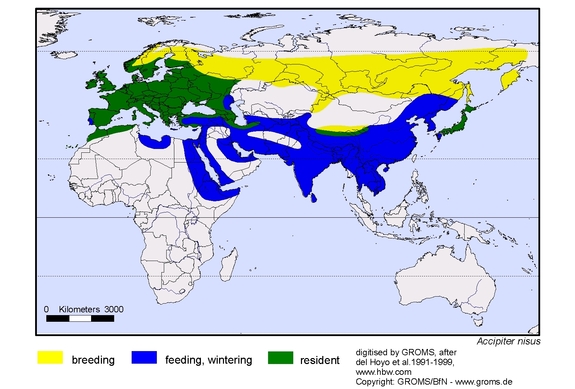