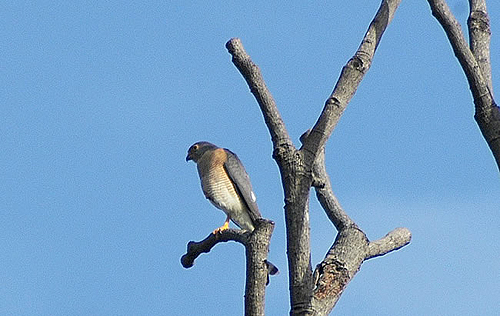 This species shows a good deal of regional variation, generally represented as distinct races:
Accipiter badius badius – South India and Sri Lanka. The adult male is clear grey above, with just a hint of rufous forming a half-collar. Primary flight feathers are dark grey, tipped with black, with white bases on the inner webs, and barred with dark brown or black. Below, the chin and throat are white, with a narrow black streak at the centre. The sides of face and neck are greyish red; the breast and belly are white, finely barred with chestnut. The under-tail thighs are white. The tail is grey, with five dark bars and a dark tip. Underneath, the wings are rufous to buff. The inner lining of the wing quills is grey, shading to pinkish buff, darker towards the tip. The eyes vary from golden to red, the cere from yellow to orange, and the legs yellow. Females are larger and more slaty above. They are also more clearly barred below than males. Immatures are brownish grey above, with paler edges to the feathers. The tail is grey with four or five clear dark bars, the last of which is quite broad. Below, it is white to buff with drop-shaped spots and streaks of reddish brown. The tail is barred grey and dark brown below. The under side of the wing is similar to the adult, but more rufous generally. The eyes are brown, the cere and feet yellow to greenish yellow.
Accipiter badius dussumier – India from Kashinir and Sikkim south to Central India. This race is larger, paler grey above and paler rufous barring below than Accipiter badius badius.
Accipiter badius cenchroides – Central Asia. This race is paler than Accipiter badius badius or Accipiter badius dussumieri.
Accipiter badius poliopsis – Assam east to eastern China, south to Indo-China. Large, similar to Accipiter badius dussumieri, but with a greyer head.
Accipiter badius sphenurus – Africa from Gambia to Ethiopia south to Zaire, Tanzania and Saudi Arabia. This race is smaller, darker and duller grey above, with darker wing quills, and more rufous below than the Asiatic races.
Accipiter badius polyzonoides – From South Tanzania south to the Cape Province. Again, a smaller bird, similar to Accipiter badius sphenurus, but with some white spots on wing coverts and mantle in many individuals. A plump, solidly built little hawk, it is smaller than the European Sparrowhawk and larger than the Besra Sparrowhawk. In adult plumage the best identification points are the almost plain grey tail at rest, and the regular light chestnut barring from throat to lower belly. The nearly plain tail, and the paler and less clearly marked barring below distinguish it from Besra and the European Sparrowhawks. It shares the most westerly part of its range with the Levant Sparrowhawk, from which it can be distinguished by five or six, not six to eight bars in the spread tail, and by the paler, less distinct barring below. From the Grey Frog Hawk on the eastern edge of its range it is distinguished by duller grey colouring above, clearer tail barring, and lack of a large white patch on the under-wing. In Africa it can be confused with other small sparrow-hawks, the Gabar Goshawk, the African Little Sparrowhawk and the Ovampo Sparrowhawk. The lack of white on the rump, and the nearly plain tail.

Listen to the sound of Shikra

Africa, Oriental Region : widespread, also South EU. The Shikra breeds from the southern part of Russia, east to South China, south as far as Sri Lanka, and in Africa south of the Sahara from Gambia and Ethiopia to the Cape Province.

Its preferred habitat is savannahs or cultivated areas. It is not found in dense forest or in very dry country. In South Central Asia, India, Burma and parts of South China, it frequents both natural savannahs and areas of cultivation and houses, and it is often quite common. In India two pairs may be found breeding within 30 acres, and in savannahs of Africa they may be found at intervals of a mile or less.

The nuptial display is a fluttering flight above the treetops, accompanied by frequent calling, the male rising and falling in flight, sometimes joined by the female. Mating takes pace on a perch, the male perching first and calling the female, who then alights beside him; the male then flies to a higher perch, where he strops his beak, before flying down to mount the female. It is a very noisy process, and helps to attract attention to the breeding site, but it ceases during nest-building and after eggs are laid. The nest is a small structure of thin sticks, eight to twelve inches across and three to six inches deep. A new nest is built each year, although usually in the same general area. It is usually placed at between twenty and forty feet above ground, usually well out on a lateral branch. It is lined with green leaves. Only the female builds, while the male stays nearby. Building takes about ten days and is chiefly done during the morning.
From two to four eggs are laid on consecutive days. They are greenish white or pale bluish, normally unmarked, but in some races with a few pale brown or grey flecks and blotches; African eggs are more often marked than Asian. Laying dates vary geographically. The breeding season is in the late spring in the northern part of the range, and in the dry season elsewhere.
The female takes sole responsibility for incubation; she is called off the nest to feed by the male and tears up the prey very quickly. The incubation period is between 30 and 35 days. Both sexes bring food to the nest, but the female stays with the young in the early stages and collects most of the prey from the male, who does not normally feed the young. The fledging period is a little over 30 days.

The main diet of the Shikra is lizards, often supplemented by small birds, up to the size of a dove, small mammals and large insects. Most prey is taken from the ground, but some is caught on the wing. It takes young sparrows out of nests in roofs, systematically searching for them. Although not shy, it prefers to hunt from cover, perching in a leafy tree for preference, and making a quick dash to acquire prey, often rushing into buildings or snatching lizards from walls. When hunting through bush it makes a series of short flights from tree to tree, descending near to the ground, and flying with an undulating motion, rather like that of the Lizard Buzzard, with a few flaps followed by short glides, flicking up wards almost vertically to a branch. It favours areas near water, but is not confined to them. In the east it has been trained to falconry, cast from the falconer’s fist at birds such as quail or crows.

Regular winter migrant South from Palearctic edge of range; some birds move SouthWest to Arabia; most to Pakistan, India and Southeast Asia. Resident in most other areas of India and in Africa, but in more deciduous habitats moves regularly between drier and wetter savannas. In West Africa moves South in dry season of October-March, to breed in Guinea woodlands, then North again in wet season; more precise study of movements in West Africa required, e.g. in Senegambia present all year round, but much more numerous in rains. Probably similar but more erratic movements in Southwest Africa. In Taru Desert and arid Tsavo, Kenya, moves North in January-March. Vagrant to Malaysia and Sumatra. 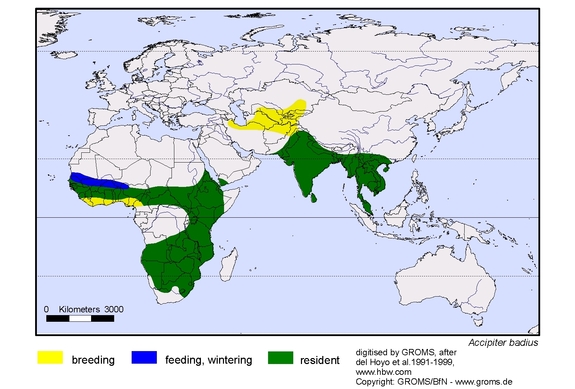