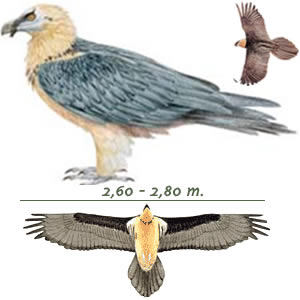 Members of the Gypaetus genus are very large vultures, having extremely long wings, and a very long, wedge-shaped and pointed tail. The bill is powerful for a vulture, and compressed. Long black bristle-like feathers project forward from the base of both the upper and lower mandibles. A patch of similar bristles project downward from the chin, from which derives the name ‘barbatus’: Bearded Vulture. The adults are white on the head and below; washed with rusty; young are much browner. This extremely distinct genus has a number of anatomical peculiarities not mentioned above. The skeleton resembles that of Neophron and Gypohierax th which it mat be related. The genus contains only one species, which lives in the mountains of Eurasia and Africa.

In the adult the crown is dirty white ringed with black; a circle round the eyes and face are covered with what looks like stiff black hair, and a black tuft of ‘hairs’ forming a beard projecting downwards on each side of the beak. The back, wings and tail are blackish grey, the feathers with white shaft streaks. Under parts are pinkish or brownish white, streaked on the throat and tipped on the breast with black. The eyes are yellow, surrounded by red skin, the beak black, the feet blackish grey. There is no appreciable difference between the sexes. Immature – entirely dark brown, head blackish, quills of wing and tail paler than in the adult. The eyes have chestnut irises contrasting with orange cornea; the legs yellowish white, bare skin round eye bluish grey. This plumage develops into the adult plumage in about five years; intermediate stages are greyish white, without rufous tinge below, with a nearly black back. Up to 13 subspecies have been described, differing to varying degrees in size and appearance, but only two are commonly recognised, Gypaetus barbatus barbatus and G. b. meridional. In fight the tail is diamond-shaped.

Listen to the sound of Lammergeier

Africa, Eurasia : North, East, South AF; Central, Southwest Asia. The Bearded Vulture, or Lammergeier, as it is sometimes known can only be found in Southern Europe, the Middle East, north India, Afghanistan, Tibet; north-east, north-west eastern and South Africa. Invariably in mountainous areas, usually at high altitudes, and only wandering to but never settling in the plains.

The Lammergeier forages over montane and sub-alpine vegetation, mostly above 1000 m, where both domestic and wild ungulates occur. In winter and early spring it exploits mid-altitude and steep-cliff areas where snow does not accumulate. In the Pyrenees, during winter and spring, the bird visits the muladares, which are places near the villages where domestic animal carcasses are dumped regularly. This magnificent and unique bird is throughout its range an inhabitant of high mountain ranges, descending to plains and steppes only to forage. In many areas it is rare, but in others is abundant, for instance in Tibet, where it is commoner than the Himalayan Griffon Vulture (Gyps himalayensis). Where it is rare it is usually found away from the haunts of man, but where numerous it frequents the neighbourhood of towns or camps, and is a scavenger and garbage-eater. In such areas it may be seen in groups of up to twenty-five together, and will search through the heaps of manure spread on the fields in spring for grubs.

Each pair has its own range where it can be seen regularly. The territory may be eight to ten miles in diameter, the birds travelling up to 25 miles at times. Within this territory they are sedentary and have regular breeding sites, usually with one or two nests, and they are likely to be found frequenting these outside the breeding season. In display the birds perform spectacular undulating flights, diving down from several hundred feet and swooping up again, or shooting past the nest ledge rolling and twisting in flight. These displays are accompanied by high-pitched screaming calls, and they continue for some time before the breeding season and through it, probably decreasing in frequency once the young one is well grown. Occasionally mutual displays are seen in which one bird soaring below the other turns on its back and presents claws to the upper bird. The displays of the Bearded Vulture are thus like those of eagles and quite different to those of other big vultures.
Nests are usually placed in niches, overhung ledges, or caves in crags, not necessarily at very high altitudes (from 1,200 to 14,000 feet in the Himalayas) and often in gorges at the lower levels of mountain ranges. The structure is large, flattish, from five to eight feet across and a few inches to two feet deep, made of dead sticks with a broad shallow cup lined with wool, hair, dung, rags, etc, not green leaves. The nest often contains many bones, skulls, hooves, and horns, and it and the nesting cave, and the cliff near it, are often very heavily plastered with droppings. One to two eggs are laid, pale rufous buff or dull salmon colour, mottled and clouded with brown and purple.
Generally the female only incubates, beginning with the first egg which hatches in about 53 days. The downy young is brooded by the parents for most of the time, up to at least three weeks old. Later in the fledging period, the young behaves much like that of a large eagle, being left alone much of the time in the nest, fed at irregular intervals, and walking about or lying down, soliciting the parent or any other large bird of prey for food. Only one young one is ever reared, so far as is known. Young in south Europe are normally out of the nest in August from eggs laid in February, and in Tibet by the end of July from eggs laid late in February or early March, so that the incubation and fledging period is about 160-170 days, of which 53 is incubation, and 107-117 fledging. Both parents tend, brood, and feed the young. Females may brood more and males bring more food in the early stages. Food brought to the nest may be carried in the feet, the bill, or the old bird’s crop. In the latter case it will be regurgitated on to the nest and fed to the young. Prey, with large young, is brought at infrequent intervals, one-and-a-half to three hours or more. The Bearded Vulture seems to be able to tear up prey in the manner of an eagle when feeding young, but also holds out large lumps, which the young, which has a very wide gape is able to swallow whole. Prey brought to the nest includes large bones, unsplit, but bones are also dropped on rocks near the nest to split them
After leaving the nest the young remains in the vicinity for some time, and is fed by the adult. Despite the length of the breeding cycle this species breeds annually where undisturbed, perhaps this varies as many nest-sites are found unoccupied.

The diet of the Lammergeier consists of bones (up to 85% of diet), especially large bones and flesh taken from dead animals. It breaks large bones into small pieces which it can eat by flying up with the bone and dropping it on special rocky slopes. Small animals (birds and rodents) are fed to chicks, forming an important part of their diet. In the Pyrenees: 88% of prey items are mammals, mainly domestic ungulates (extremities of sheep and goat), Chamois and Marmot ,birds but rarely reptiles. In Corsica the diet is mainly limbs of domestic ungulates (36% sheep and goat, 33% cattle, mostly calves), pigs, both wild and domestic (16%), Mouflon (12%); birds and reptiles are scarce in the diet. Breeding success on Corsica seems to depend on particular stock rearing activities as their main food source is transhumant caprines and free range cattle. In the Alps, the main diet of the released birds is Chamois and sheep.

This species has an extremely large range, and hence does not approach the thresholds for Vulnerable under the range size criterion (Extent of Occurrence <20,000 km2 combined with a declining or fluctuating range size, habitat extent/quality, or population size and a small number of locations or severe fragmentation). Despite the fact that the population trend appears to be decreasing, the decline is not believed to be sufficiently rapid to approach the thresholds for Vulnerable under the population trend criterion (>30% decline over ten years or three generations). The population size may be small, but it is not believed to approach the thresholds for Vulnerable under the population size criterion (<10,000 mature individuals with a continuing decline estimated to be >10% in ten years or three generations, or with a specified population structure). For these reasons the species is evaluated as Least Concern.
The species is sedentary. The global population is not concentrated in Europe, but the species persists in Spain (Pyrenees), Turkey, France (Pyrenees and Corsica) and Greece (Crete and the continent). The European population is 162 breeding pairs, with 93 in the EU; additionally North Africa has 5 pairs in Morocco. Only the Spanish and Turkish populations number 50 breeding pairs or more. The Lammergeier is widely distributed in mountainous regions in Eurasia and Africa with a small proportion of its global range in Europe. There are apparently large populations in East Africa, Central Asia and the Himalayas. The species is resident throughout its range. In Europe, the species now breeds only in Andorra, Spain (regions of Navarra, Aragon and Catalua, all in the Pyrenees), France (Pyrenees, Corsica and the Alps), Greece (in Crete and on the continent in Thrace, Epirus, Thessaly and the Pindus range), Turkey (throughout Anatolia) and in North Africa, only in Morocco (Atlas range). The total population for Europe and North Africa is ca. 167 pairs of which 148 breed regularly, including 112 pairs in the EU of which 93 breed regularly.
The species was exterminated from Germany by 1855, Switzerland 1884, Bosnia and Herzegovina 1893, Austria 1906, Italy 1913, Romania 1935, Czechoslovakia 1942, Yogoslavia (Serbia, Montenegro) 1956, Bulgaria 1966, and the Former Yugoslav Republic of Macedonia in 1990. The decline continued during 1970-1990 in Greece and Albania. However, the species is locally stable, or decreasing only slightly in Russia, stable in Turkey and France and increasing in Spain. A reintroduction project in the Alps (Austria, France, Italy and Switzerland) has released 68 captive bred birds during 1986-1996 at 5 release sites. The number of free-flying birds is estimated at 38-43. One pair laid eggs in the French Alps in 1996 and hatched one chick in 1997. The decline is still progressing in Greece. Its main reasons are direct persecution and poisoning. Recently habitat loss, lack of food resources due to abandonment of extensive livestock economy and disturbance by tourism and recreational activities have also had adverse effects.

It is largely a resident species, although with enormous home ranges and the young may disperse widely. Although there have been more than 100 sightings of Lammergeiers outside the Pyrenees since the late 1980s, none of the 33 young wing tagged in the Pyrenees during 1987-1996 were seen among them. The average home range of 13 of these young was 4,932 (950-10,294) sq km. No adults have so far been wing tagged or radio tagged. In the Alps 70% of the released birds return to the release site although one bird was recorded ca. 1,300 km from the release area, outside the Alps. So Juveniles and immatures stay mainly within natal mountain system, and appear to straggle less than other west Palearctic vultures; but forage down to foothills. 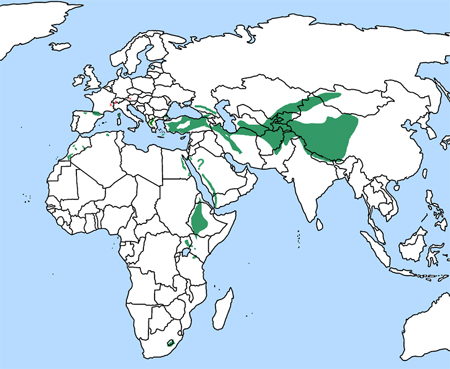