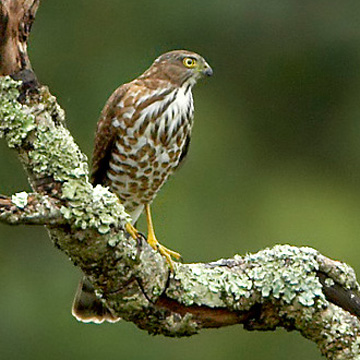 This bird is a medium-sized raptor (23 to 36 cm) with short broad wings and a long tail, both adaptations to fast manoeuvring. During flight the barred underwings are a distinction from the Shikra, A. badius. This species is like a darker version of the widespread Shikra, but all plumages have a dark vertical throat stripe. The adult male Besra has dark blue-grey upperparts, and is white, barred reddish below. The larger female is browner above than the male. The juvenile is dark brown above and white, barred with brown below. It has a barred tail.

Listen to the sound of Besra

Oriental Region : widespread. The Besra is a widespread resident breeder in dense forests throughout south Asia from Pakistan and India to south China and Indonesia.

Occurs in areas of closed-canopy shrubland, dense broad-leafed and coniferous forest, and woodland. Outside the breeding season it is also found around marshes, fish ponds, mangroves, and agricultural lands

Preys on small birds, which it captures after fast dashes through the forest interior, and also on small mammals, lizards, and large insects

Mainly sedentary, but some birds from N India and Nepal may move down onto plains in winter. 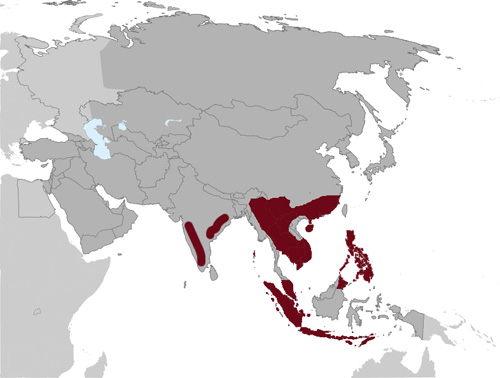